Sebastian Vettel has attracted cynicism and even boos this year but if there was any doubt that the young German belongs among Formula One's greats, he obliterated it at Suzuka. 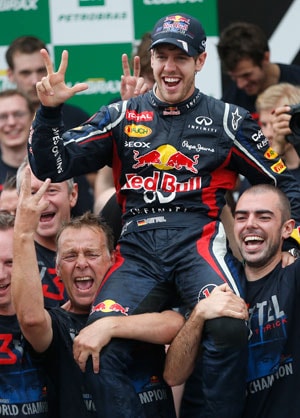 Sebastian Vettel is used to dominating from the front but a brilliant, come-from-behind victory in Japan silenced the critics and proved it's not all about his Red Bull car. (Team and Driver's standings)

The young German has attracted cynicism and even boos this year but if there was any doubt that he belongs among Formula One's greats, he obliterated it at Suzuka.

Vettel was accused of sending fans to sleep with his consecutive wins at Belgium, Italy, Singapore and South Korea, but he had to fight for victory in Japan.

The performance, described as "quite supreme" by his team principal Christian Horner, leaves the 26-year-old all but assured of a fourth successive world title.

Only two men in Formula One history -- Juan Manuel Fangio and Michael Schumacher -- have won four in a row, and neither managed it at such a young age.

At Suzuka, Vettel qualified second on the grid despite being without his speed-boosting Kinetic Energy Recovery System (KERS), a handicap estimated at 0.3sec per lap.

And at the start of the race, he got away slowly and was clipped by Lewis Hamilton, suffering damage to his front wing.

But he waited patiently in third place and nursed his tyres to the extent that he only needed two pit stops, compared with three for his team-mate Mark Webber.

And when he finally got his chance, late in the race, he pounced on leader Romain Grosjean, darting past and then watchfully bringing his deteriorating tyres home.

Vettel has now won five races in a row, the longest winning streak since Schumacher in 2004, and four of the last five grands prix in Japan.

With a 90-point lead over Alonso and 100 available from the last four races, his coronation is a foregone conclusion, barring an extraordinary turn of events.

Vettel has the statistics of a champion, but does not always get due recognition. Critics point to his superior car, crafted by Red Bull's brilliant designer, Adrian Newey.

His decision to ignore team orders and snatch victory from a fuming Webber this year in Malaysia lowered him in the opinion of some fans.

And others seem to be growing tired of the finger-pointing celebration and excitable yelling from the cockpit that accompanies every win.

"Ichiban (first)!" whooped Vettel over the radio as he took the chequered flag for the ninth time this season. "You're the best team in the world. I love you guys. Yes! Ichiban!"

Horner highlighted a telling moment in Japan, when Webber had the chance to follow Vettel past Grosjean and challenge his team-mate for victory.

"Seb had DRS (drag reduction system) when he passed Grosjean," Horner said. "There was one lap where Mark got right into the slipstream but because he pushed the button too early, the flap didn't open."

Webber got stuck behind Grosjean, and his chance of winning disappeared. Fine margins that separate the great from the rest.

Comments
Topics mentioned in this article
Giancarlo Fisichella Felipe Massa Michael Schumacher Kamui Kobayashi Jenson Button Lewis Hamilton Japanese Grand Prix Sepang Formula 1 McLaren Honda Brawn
Get the latest updates on ICC T20 Worldcup 2022 and CWG 2022 check out the Schedule, Live Score and Medals Tally. Like us on Facebook or follow us on Twitter for more sports updates. You can also download the NDTV Cricket app for Android or iOS.