Sebastian Vettel shrugged aside any disappointment he felt about his dramatic relegation to the back of the field when he arrived at the Yas Marina Circuit on Sunday ahead of the Abu Dhabi Grand Prix. 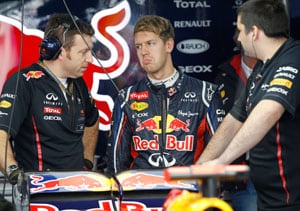 Sebastian Vettel shrugged aside any disappointment he felt about his dramatic relegation to the back of the field when he arrived at the Yas Marina Circuit on Sunday ahead of the Abu Dhabi Grand Prix.

The defending world champion and series leader, who holds a 13 points lead in the title race ahead of Fernando Alonso of Ferrari, instead placed his faith in his Red Bull team and looked ahead to the 55-laps race with confidence.

The 25-year-old German refused to dwell on the stewards' decision - made five hours after qualifying ended - to punish him for having insufficient fuel to supply a one litre sample after he had clocked the third best qualifying time.

"We start last and the chance is there to still have a good race. It was rubbish for us, we were in a good starting slot, but there's no reason to look back.

"Today is a new day, the sun is up. There's no reason to be stupid. We have a good car with good pace and hopefully we can use that to make up some places.

"Some changes have been made to the car to make overtaking a little easier in DRS (Drag Reduction System) range. We'll see if that works out..."

The stewards' decision sets up the prospect of a rare thrilling contest around the man-made marina in the twilight event with Vettel, from the back, trying to work his way through the field to catch title rival Alonso, who starts from sixth on the grid with a possible podium position in sight.

Alonso said: "It was a strange Saturday for sure -- waiting for what would be the starting grid order. In the end, it doesn't change too much for our race. We always try to do 100 per cent.

"A podium would be a nice reward for our weekend because we've been so slow. If we can overtake three cars, it will be a dream but it will be tough...."

Both men may struggle, however, to catch pole-sitting Briton Lewis Hamilton of McLaren who dominated qualifying as he secured his sixth pole of the season and the 25th of his career.

Hamilton will start with Vettel's Red Bull team-mate Mark Webber alongside him at the front and the Englishman will be hoping for a good getaway after some relatively poor starts in recent months.

A strong race from Webber could also open the way for Vettel, if he breaks into the top ten, to score the points that may enable their team to clinch the constructors' title.

That may not be simple, however, as Alonso's Ferrari team-mate Felipe Massa, starting eighth, will be a considerable bulwark to any progress as he seeks to protect the Spaniard's interests.

Vettel's car will run with a changed gearbox, gear ratios and suspension set-up to help his straight line speed, but the Red Bull is not as strong on the straights as the Ferraris who have struggled in other sections of the circuit this weekend.

The outcome is an intriguing prospect that is likely to ensure that, reliability notwithstanding, Alonso keeps his title hopes alive and the championship is not settled until the final race in Brazil next month.

Comments
Topics mentioned in this article
Abu Dhabi Grand Prix Sebastian Vettel Red Bull Mark Webber Formula 1
Get the latest updates on IPL 2021, IPL Points Table , IPL Schedule 2021 , live score . Like us on Facebook or follow us on Twitter for more sports updates. You can also download the NDTV Cricket app for Android or iOS.