The German had stopped on track shortly after setting the third-fastest time in Saturday's session. 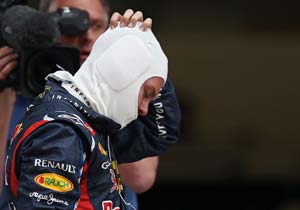 Sebastian Vettel has been demoted to the back of the grid for the Abu Dhabi Grand Prix, slowing his charge to a third-straight Formula One title.

The German stopped on track shortly after setting the third-fastest time in Saturday's session, and the stewards said he had broken the rules by not having enough fuel on board.

With the championship leader starting at the back of the 24-car field, his closest challenger Fernando Alonso is elevated to sixth.

Vettel broke a rule that all cars must have at least a litre of fuel remaining after qualifying for officials to check for illegal fuel.

The same violation led to McLaren's Lewis Hamilton being dropped to the back of the grid at the Spanish Grand Prix in May.

Christian Horner, principal of Vettel's Red Bull team, said the German had not been under-fueled, which would give him a performance advantage, but the lack of fuel was the result of a blunder by mechanics.

"Unfortunately, for reasons yet to be fully understood, 850 millilitres of the required one litre was pumped out of the car following post-race checks," he said on the F1 website.

He added that Red Bull had elected to start Vettel from the pit lane, which means he must leave after the rest of the field has started the race but allows the team to make broad changes to the car's set-up.

Vettel leads the championship by 13 points from Alonso with three races remaining.

Comments
Topics mentioned in this article
Formula 1 Abu Dhabi Grand Prix Lewis Hamilton
Get the latest Cricket news, check out the India cricket schedule, Cricket live score . Like us on Facebook or follow us on Twitter for more sports updates. You can also download the NDTV Cricket app for Android or iOS.