The Red Bull driver overtakes the two McLaren's to post the fastest time. Sebastian Vettel on Friday moved a step closer to becoming the youngest triple world champion in Formula One history by topping the second practice times for Red Bull ahead of Sunday's Abu Dhabi Grand Prix.

The defending world champion and current series leader clocked a best time of 1min 41.751secs to head the time-sheets above nearest rivals Lewis Hamilton and Jenson Button of McLaren.

Hamilton had been fastest in the earlier session in scorching hot conditions at the Yas Marina circuit but was unable to match the 25-year-old German's improved effort in the twilight session that began in daylight and ended under floodlights.

Hamilton's best lap left him one-tenth of a second short of Vettel's fastest lap, the champion revelling in throwing his car around the track on which he could on Sunday help clinch a third successive constructors' title for Red Bull.

Vettel was pleased but cautious after his strong showing which left him well clear of title rival Fernando Alonso of Ferrari.

"We need to work on the car overnight but the pace was not bad," he said. "It was quite slippery today with all the drivers. We saw that many cars were off track here as they are trying to explore the limits."

"That is what we usually do on a Friday, we are more or less there, but we need to make sure we get the car forward. I think we can be happy with today."

"Overall we got a good lap on the soft tyres but in general pace the McLaren's were quick and seem competitive, so they're the ones we need to look out for and beat."

"We need to improve the car overnight to qualify as high as we can tomorrow. Today the battle was with Lewis and he was very quick on the medium tyre so we need to do a little bit of catching up to make sure we are very close to them and possibly ahead of them tomorrow." ( Also read: Has the lead but Vettel knows he still is vulnerable)

Button was 0.66sec down in third ahead of a group of drivers who were little more than seven-tenths of a second slower than the dominant German.

These were led by fifth-placed Romain Grosjean of Lotus ahead of team-mate Kimi Raikkonen, Alonso of Ferrari, who is second in the title race and 13 points behind Vettel with three races to go. 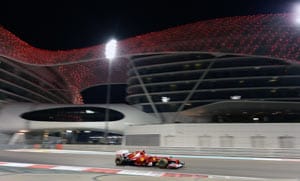 Team-mate Felipe Massa was eighth, Pastor Maldonado of Williams ninth and Mexican Sergio Perez 10th for Sauber in a session rin with the track temperature of 41C at the start.

Webber, whose efforts in support of Vettel could clinch the constructors championship for Red Bull, managed only 21 laps in the second session because of a fluid leak on his car.

He said: "It looks like a water generator or some KERS (Kinetic Energy Regeration System) issue, it was a pain.

"We have tonight to fix it and come back tomorrow. We will look through stuff tonight. I have no idea what happened on long runs but tyres don't look too bad."

Red Bull team chief Christian Horner was left not knowing if he should laugh or cry as his team toiled in the torrid weather.

He was proud of the perfection that saw Vettel fastest but, like Webber, frustrated at his car's frailty.

"I think it would have been difficult to envisage that we would be coming to Abu Dhabi 13 points ahead of Fernando after the summer break, when Sebastian was trailing by about 40 points," he said.

"So the fact that we have worked hard to get ourselves into this position is great.

"It is now the best of three effectively, and we have to make sure that we don't look back after three races and say that we didn't give it our very best. That is what we will be aiming to do."

After four straight wins from Vettel and his RB8 Red Bull car, they are hot faovurites.

But Horner warned, there is no room for relaxation.

He said: "There is no room for complacency within the team and there is not one individual who will be thinking in that manner."

Comments
Topics mentioned in this article
Sebastian Vettel Red Bull Mark Webber Jenson Button Lewis Hamilton Formula 1 Abu Dhabi Grand Prix
Get the latest Cricket news, check out the India cricket schedule, Cricket live score . Like us on Facebook or follow us on Twitter for more sports updates. You can also download the NDTV Cricket app for Android or iOS.