Sebastian Vettel has been catching the F1 action this year from his rear-view mirror. Five consecutive wins later, the German just needs to finish fifth or better in the Indian GP - a race he has won twice - to seal his fourth title. 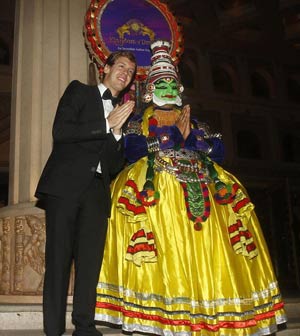 Formula One's blue-eyed boy Sebastian Vettel won the Japanese Grand Prix in an emphatic fashion to seal his fifth consecutive win on the trot. Now, Indian fans have the delicious prospect of watching the undisputed German champion seal his fourth title in their own backyard.

The race for the title this year has hardly been close with Vettel showing not just raw speed and deft skills like before but a new-found maturity as well. It is this maturity that will further bolster his chances at the Buddh International Circuit - a track where he has won both times since F1 touched Indian shores.

Considering F1 won't be making a return here next year, local fans are expected to cheer the race even harder - the ones backing Vettel being the loudest of the lot. Their hero, after all, needs a fifth-place finish or better to book yet another driver's title. And going by how Vettel has tackled the much-appreciated track at Greater Noida, all bets are likely to be placed on him.

In the inaugural edition, the driver led throughout the race and finished almost 8.4 seconds ahead of his Ferrari rival Fernando Alonso. "Yes boys! Yes, we did it," Vettel had shouted over the team radio when he finished. "The first Indian Grand Prix. Fantastic challenge, we did it!" And he did it again the very next year.

Coming in with three consecutive wins powering his surge, Vettel went from pole to chequered flag once again in 2012. The fact that Alonso, behind him, could not even get much of the slipstream showed that the Indian track is extremely partial to the German's strengths.

This year, it is likely to be the same again. "I will race there with winning on my mind. And it is never our style to say, 'Well, let's focus on finishing fifth.' We always attack as much as we can - it is in the DNA of the team," he said in an interview to formula1.com after winning the Japanese F1.

While the excitement of a Grand Prix lies as much in the aggression as in its unpredictability, there is no mystery in how drivers have stacked up against each other in terms of numbers, this season. So far, Vettel has 297 points, a massive 90 points more than second-placed Alonso. So, while there will surely be close battles for the second, third, fourth and fifth spots in his rear-view mirror, a young German is almost certain to cruise right up ahead in what could be the last F1 contest here.