Vettel has won three of the past four races in Japan and will be aiming to clinch his fourth successive title in Sunday's race. He needs to win and have nearest rival Fernando Alonso finish worse than eighth. 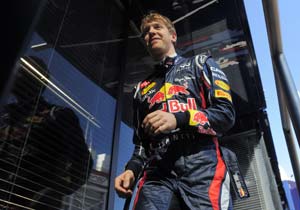 Red Bull driver Sebastian Vettel had the fastest time in Friday's practice for the Japanese Formula One Grand Prix, indicating the German is in a good position to clinch his fourth straight championship in Sunday's race.

Vettel's time of 1 minute, 33.852 seconds around the Suzuka circuit was 0.168 seconds faster than teammate Mark Webber. Mercedes driver Nico Rosberg was two tenths of a second off Vettel's time.

Vettel has won three of the past four races in Japan and will be aiming to clinch his fourth successive title in Sunday's race. He needs to win and have nearest rival Fernando Alonso finish worse than eighth.

If he wins on Sunday, Vettel will join Michael Schumacher and Juan-Manuel Fangio as the only men to win four championships in a row.

Mercedes driver Lewis Hamilton, who was fastest in the morning session, was sixth ahead of Toro Rosso's Daniel Ricciardo. Ferrari's Felipe Massa was eighth while McLaren driver Jenson Button, who won the Japanese GP in 2011, was ninth.

There were numerous incidents in Friday's afternoon session.

Alonso lost control of his Ferrari at the Degner curve and finished 10th. McLaren driver Sergio Perez spun off the track and slammed into a tire wall sideways but could be heard over the team radio saying he was fine and finished 16th.

Jules Bianchi sat out the afternoon practice after running off the track early in the first practice and colliding head-on into a tire wall. The Marussia driver was unhurt but was unable to take part in the afternoon session as his chassis was not repaired in sufficient time.

Comments
Topics mentioned in this article
Jenson Button Kamui Kobayashi Felipe Massa Lewis Hamilton Mark Webber Japanese Grand Prix Formula 1
Get the latest updates on ICC T20 Worldcup 2022 and CWG 2022 check out the Schedule, Live Score and Medals Tally. Like us on Facebook or follow us on Twitter for more sports updates. You can also download the NDTV Cricket app for Android or iOS.