Sebastian Vettel charges through to stay on top

"It was a crazy race It's hard enough to get through the field once, but we did it twice," said the Red Bull driver. 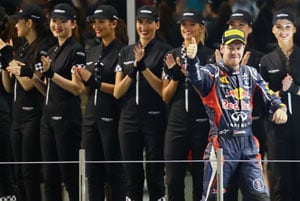 Sebastian Vettel improved 21 positions from his starting slot on the grid on Sunday -- the biggest jump by any driver since fellow-German Christian Danner finished fourth at the United States Grand Prix in Phoenix in 1989.

Then, Danner drove his Rial Ford from 26th to fourth. Vettel started 24th in his Red Bull car and finished third at the Yas Marina Circuit in Sunday's Abu Dhabi Grand Prix.

"It was a crazy race.," said Vettel. "It's hard enough to get through the field once, but we did it twice. We were in quite a good position, but I was surprised by Daniel Ricciardo's move and I was caught out.

"I should have been more aware and I had no choice but to avoid him and run to the right and I hit a DRS board flat on and had to pit which wasn't good at that moment because we came out dead last.

"Then, it was all or nothing and we were pushing but the pace was there and it was a very good race for us.

"The second safety car helped and the target was to win the race because there were only three cars to go but unfortunately I didn't get through Jenson (Button) as quickly as the other cars before I finally made it and it was very close!

"But I saw the gap and he behaved fair -- you can't do that kind of move with all the drivers so it was a lot of fun and a great result."

Asked if he thought a podium was achievable at the start of the race, Vettel said: "Yes I did to be honest with you. After the first couple of laps that target was drifting a little bit away.

"I had a messy start, wanted to get through cars quickly and damaged the front wing, and under the safety car had a bit of a mistake with Ricciardo, because he was braking on the straight and we nearly touched."