Gutierrez scored his first points in F1 with a sixth place finish in the 15th race of the season at Suzuka in the 2013 season. 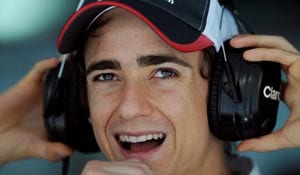 Gutierrez signing was completed a week after Sauber brought the experienced Adrian Sutil from Force India. The extension given to the 22-year-old means there will two Mexican drivers on the grid in 2014, giving the South American nation a boost as it seeks a return on the F1 calendar.

"We are pleased Esteban will drive for us in 2014, because we believe he is a talented young racing driver. Last season he experienced first hand how hard it can be for a rookie to step into F1. Nevertheless, throughout the season he improved significantly in qualifying as well as in the races and finished the year as the best rookie in the drivers' championship," said team principal Monisha Kalternborn.

"I am confident Esteban will be able to use his experiences to gain results, and this will be helped by the fact he is very well acquainted with every member of the race team," she said.

"We at Telmex and Telcel are very proud to continue being part of Sauber to keep consolidating our successful history in motorsport, particularly in F1 and our driver development programme for Mexican and Latin drivers such as Esteban, a great young talent, friend and human being," said Slim.

Gutierrez fared better in the second half of 2013 and scored his first points in F1 with a sixth place finish in the 15th race of the season at Suzuka.

"It was a steep learning curve last season, but by working closely with the team I was able to improve continuously. It will be my fourth year with the team, the second as a racing driver, and I feel comfortable in taking the next step. The technical challenges in 2014 will be massive. Therefore it will be even more important to know well the people you are working with," he said referring to the return of turbo engines in the sport.

Eighteen-year-old Russian Sergey Sirotkin was named as the reserve driver of the midfield outfit.

Comments
Topics mentioned in this article
Formula 1 Sauber McLaren Michael Schumacher Karun Chandhok Esteban Gutierrez Russian Grand Prix Indian Grand Prix Bahrain Grand Prix Austrian Grand Prix
Get the latest updates on India vs Australia Series, check out the India vs Australia Schedule for 2020-21 and Ind vs Aus live score . Like us on Facebook or follow us on Twitter for more sports updates. You can also download the NDTV Cricket app for Android or iOS.