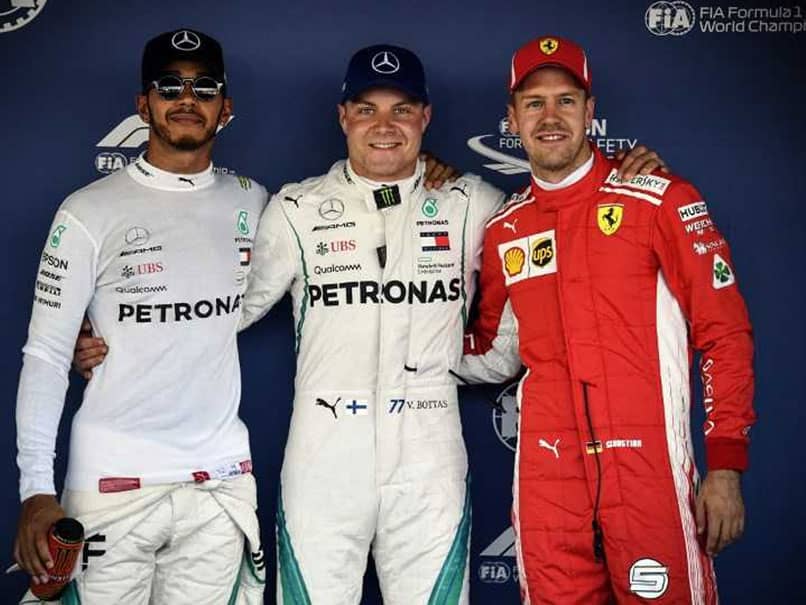 Valtteri Bottas claimed his second pole this year and the sixth of his career.© AFP

Valtteri Bottas upstaged his championship-leading Mercedes team-mate Lewis Hamilton with a dazzling lap in Saturday’s qualifying session to seize pole position for the Russian Grand Prix. The Finn, who has struggled to keep pace with the defending four-time champion for much of the season, relished the confines of one of his favourite tracks as he clocked a record lap in one minute and 31.387 seconds. His late fastest lap lifted him ahead of Hamilton, who aborted his final lap after running wide at Turn Seven, and put a grin back on his face as the Mercedes pair delivered another front row lockout.

It was his second pole this year and the sixth of his career. "Alright guys, good job that," said Bottas, as he controlled his feelings after the session.

"I’m really happy, but it’s only the first step this weekend. It’s a massively long run to Turn One from the start."

Bottas claimed his maiden Formula One victory in Russia last year and showed a clear affinity with the track as Sebastian Vettel of Ferrari, who trails Hamilton by 40 points in the title race, took third.

"I messed up in the last sector," said a downcast Vettel. "It was at Turn 15 and I think there were one and half or two tenths lost, but not enough.

"It was important to get as close as possible and it should have been closer, but not enough to be a threat."

Vettel said he had reminded Bottas of the start of last year’s race when Bottas, from third, passed both Ferraris to take the lead and win. "I just spoke to him so maybe we can turn that around this time," added Vettel.

The two Red Bulls did not qualify for the top-10 shootout, knowing they face engine penalties that will mean they start Sunday’s race from the back of the grid along with both Toro Rosso cars and Fernando Alonso’s McLaren.

On a bright blue-skied day by the Black Sea, Bottas began by setting the early pace ahead of the Ferraris until Hamilton emerged to establish his supremacy again, trimming his lap record, set in the morning’s final practice session, to 1:32.410.

To the dismay of home fans in the crowd at the Sochi Autodrom, Russia’s only representative, Serge Sirotkin, spun heavily and brushed the barriers in the closing minutes in his Williams at Turn Nine.

This wrecked his hopes and left him exiting along with Brendon Hartley of Toro Rosso, retirement-bound two-time champion Fernando Alonso and his McLaren team-mate Stoffel Vandoorne, who sandwiched Sirotkin in 18th, and last man Lance Stroll in the second Williams.

It meant that, not for the first time, two of the sport’s biggest and most famous teams, multi-champions Williams and McLaren, had lost both cars in the opening session.

Bottas and Hamilton continued to top the times early in Q2, both taking the more durable ‘ultra-soft’ tyres, as did the two Ferraris, as part of a plan for Sunday’s race strategy. After their opening runs, the ‘scarlet scuderia’ trailed by nearly half a second each.

Hamilton switched to ‘hyper-softs’ and was significantly quicker before he aborted the lap, under instructions, to avoid being required to start on those tyres.

The session, as a result, was relatively insipid as the two Red Bull drivers, Pierre Gasly of Toro Rosso who faces a penalty, Marcus Ericsson of Sauber and Nico Hulkenberg of Renault were eliminated without much of a fight.

Sebastian Vettel Formula 1
Get the latest updates on India vs Australia Series, check out the India vs Australia Schedule for 2020-21 and Ind vs Aus live score . Like us on Facebook or follow us on Twitter for more sports updates. You can also download the NDTV Cricket app for Android or iOS.