The management hopes to conclude sales in the weeks to come. An official announcement will be made about the new owners subsequently. 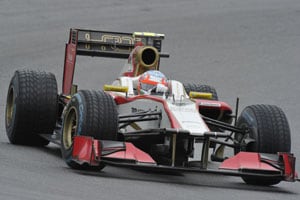 Spanish Formula One team HRT, who have yet to garner a point in its three seasons in Formula One is up for sale, its owners, Thesan Capital, said on Monday.

"The current owners of HRT Formula 1 Team, TC II S.a.rl., would like to confirm that they are currently in talks with a number of groups interested in buying the team," according to a statement on the team website hrtf1team.com.

"HRT Formula 1 Team's current management hopes to conclude the sale in the upcoming weeks," it added.

Thesan Capital bought the team in July 2011 and moved its base to Madrid but the team has not made an immediate impact, given a limited budget and Cosworth engines that have proved less efficient than those of their rivals.

The investment company said it hoped to build on the progress it had made in 2012 and the new owner would be made known in the coming weeks.

Team officials added: "We're very proud of the work done by the entire team and of the excellent sporting evolution achieved but the time has come for the team to continue growing with new financial backing.

"We're convinced that the sporting potential of the team is huge and that the presence of new investors can give it a big boost."

HRT's drivers this year are Spain's Pedro de la Rosa and India's Narain Karthikeyan while they have a Chinese test driver Ma Qinghua.

According to British magazine Autosport, Middle Eastern investors are among the potential candidates for a buy-out.