Mercedes Petronas had a disastrous start to the new Formula One season with both their drivers, Michael Schumacher and Nico Rosberg, failing to finish the Australian Grand Prix on Sunday. 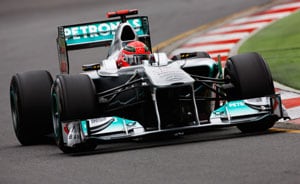 Mercedes Petronas had a disastrous start to the new Formula One season with both their drivers, Michael Schumacher and Nico Rosberg, failing to finish the Australian Grand Prix on Sunday.

Seven-time world champion Schumacher came to grief on the third turn and battled on before retiring after 19 laps followed shortly afterwards by fellow German Rosberg with mechanical problems after being rammed by Rubens Barrichello.

Mercedes, who finished fourth in the constructors' title last season, came away from the opening race without any points.

"This was the toughest weekend of our 20 races as Mercedes GP Petronas," Mercedes vice president Norbert Haug lamented.

"From the first practice session, we had various technical problems which we did not experience during our pre-season testing preparations of more than 5000km."

Schumacher, looking to improve on his ninth placing in the drivers' championship in last year's comeback, struck trouble soon after the start.

"The start of the season certainly has not worked out as we had hoped, and we will tick this race off now and concentrate on the next one in Malaysia," he said.

"I had quite a good start but was then hit in turn three which punctured the right rear tyre and resulted in damage to the floor.

"As the damage was quite substantial, we decided to stop the car for safety reasons.

"It was an even bigger shame that Nico was then knocked out of the race as he could have scored some good points for the team."

Rosberg had a shunt with Barrichello in a Williams midway through the race which earned the Brazilian a drive-through penalty as punishment.

"It was a tough race until my retirement with the cars behind me pushing hard," Rosberg said.

"I saw Rubens in my mirror and he was quite far away so I was surprised that he hit me. I immediately thought that was it and I had to pull over to stop the car."