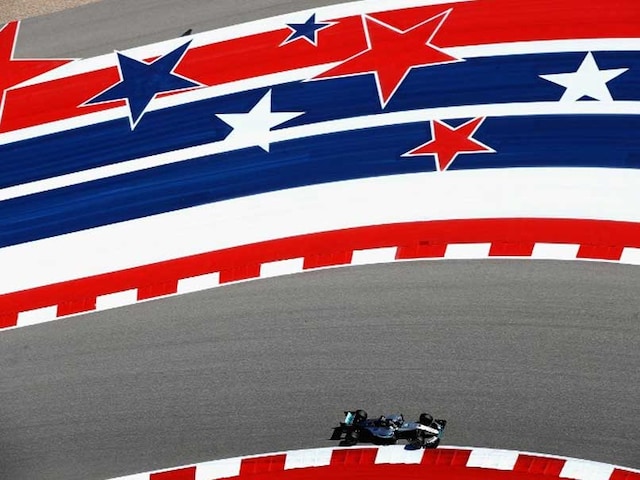 Nico Rosberg topped the time sheets in the second practice session of the US Grand Prix.© AFP

Championship leader Nico Rosberg bounced back to top the times with Mercedes team-mate Lewis Hamilton back in third place after Friday afternoon's second free practice ahead of this weekend's United States Grand Prix.

The two Silver Arrows cars were separated by the Red Bull of Australian Daniel Ricciardo in a session that saw the top three wind up more than eight-tenths of a second clear of the pack led by four-time champion Sebastian Vettel of Ferrari.

Hamilton was fastest in the opening session in the morning, but he was pegged back in the afternoon when Rosberg clocked a best lap in one minute and 37.358 seconds at the Circuit of the Americas, 20-kms out of Austin.

That was 0.194 seconds quicker than Ricciardo and 0.291 faster than Hamilton who trails Rosberg by 33 points in the title race with four races remaining.

Both Mercedes men complained in different ways about their tyres, but kept low profiles in the paddock after the session as they analysed their data.

"Just let me know if my tyres have any cuts," said Rosberg, referring to the amount of dangerous debris that had littered the circuit during the session.

Ricciardo, as usual, was beaming with optimism afterwards.

"That was good and we are feeling confident, but I am sure there is more to come from Mercedes and we don't know how cautious they were being today."

Vettel was 0.820 seconds adrift in fourth ahead of Dutch teenager Max Verstappen in the second Red Bull, Renault-bound Nico Hulkenberg of Force India and his team-mate Sergio Perez.

"A tough day for us," said Vettel. "We had problems in the morning when a little wing failed and came off and we lost some track time.

"I think we have been on the back foot today and I'm not entirely happy with the balance of the car yet. It's a bit too nervous all round.

No plans for a sabbatical, no reason to give up the fight: @LewisHamilton gets ready for the #USGP >> https://t.co/3JybyBLJyI pic.twitter.com/PwTGMN61lP

Jenson Button, the 2009 champion, was an encouraging eighth ahead of his McLaren-Honda team-mate and two-time champion Fernando Alonso and Kimi Raikkonen who was 10th in the second Ferrari.

Rosberg can clinch his maiden drivers' title if he finishes second in the final four races with Hamilton winning them all, but he has said he wants to win in style.

On a bright Texan day with an air temperature of 22 degrees Celsius and a track temperature of 37 degrees, the action was mostly routine with a only a few interruptions for debris on the circuit.

The second practice was halted by a red flag for three minutes shortly before the hour mark, when a piece of carbon-fibre was collected at Turn Four.

It appeared to have broken off one of the cars as they rode the high kerbs.

The day was notable, too, for being an anniversary of three memorable championship showdowns of the past -- Niki Lauda clinching his third title in Estoril on October 21, 1984, Ayrton Senna colliding with Alain Prost to confirm his second title in Suzuka in 1990 and, in 2007, Raikkonen grabbing his first title ahead of Hamilton in Sao Paulo.