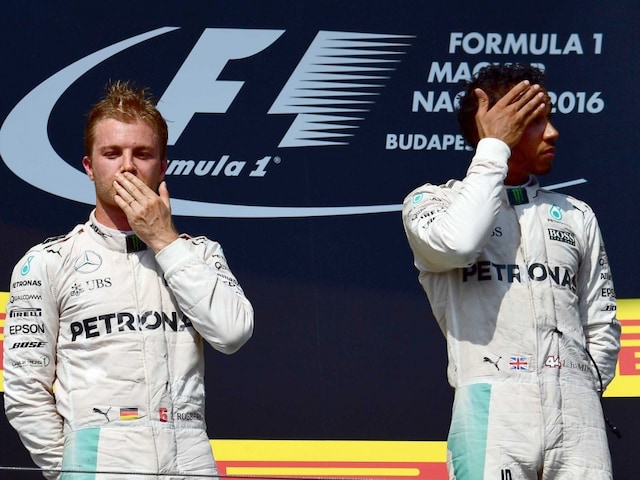 A victorious Nico Rosberg had no idea where his Mercedes team-mate Lewis Hamilton had finished in Sunday's Belgian Grand Prix until he studied the results after finishing the race.

He knew that Red Bull's Australian Daniel Ricciardo had followed him home in second place, but beyond that knew very little of the finishing order.

"After the chequered flag, I looked at the results and I knew Daniel was behind me and then I see 'HAM' in P3 and I was like 'What? Seriously?'," Rosberg said.

"I didn't know until after the race where he was!"

Hamilton's record recovery from starting 21st on the grid at the Spa-Francorchamps circuit to finish third meant that Rosberg had only trimmed his rival's championship lead, not overhauled it.

From being 19 points in front before the race, Hamilton was only nine ahead - but that was a triumph for the champion given that he had taken three new power-units and collected a total of 60 penalty places for the grid.

As a result, with eight races remaining starting at this week's Italian Grand Prix at Monza, the final European event of the year, Hamilton leads with 232 points to Rosberg's 223.

Rosberg, however, said he was not dismayed by his own fate and had not given deep consideration to the points position.

"That's not what I'm focusing on," he said. "I came here wanting to win - and the opposition was unusually close this weekend, not eventually in the race, but up to that they were very close.

"I'm just very happy it was a perfect weekend for me. We did great selecting the right tyres. We were the only ones who really got it nailed with the tyre choice.

"In our race, the medium, was the right tyre. It worked out really well."

The 31-year-old German also swept aside suggestions that Hamilton was now in a much stronger position with his reserve of power units for the rest of the season.

"I don't think of it in that sense," he said. "Sure, I'm aware of it, but he had the big disadvantage at the weekend.

"I'm just focusing on my thing and that's it. I don't think it's going to make a big difference anymore."

Rosberg's emphatic victory on Sunday was his first in the classic Belgian race, his sixth of the season and the 20th of his career as he chases after Hamilton and, he hopes, his first drivers' title.

The defending three-time champion, meanwhile, admitted his relief at claiming a podium finish and heads to Monza hunting his 50th career victory before the final run-in to the end of the season.

Comments
Topics mentioned in this article
Mercedes Nico Rosberg Lewis Hamilton Spa-Francorchamps Belgian Grand Prix Formula 1
Get the latest updates on IPL 2020, check out the IPL Schedule for 2020 and Indian Premier League (IPL) Cricket live score . Like us on Facebook or follow us on Twitter for more sports updates. You can also download the NDTV Cricket app for Android or iOS.