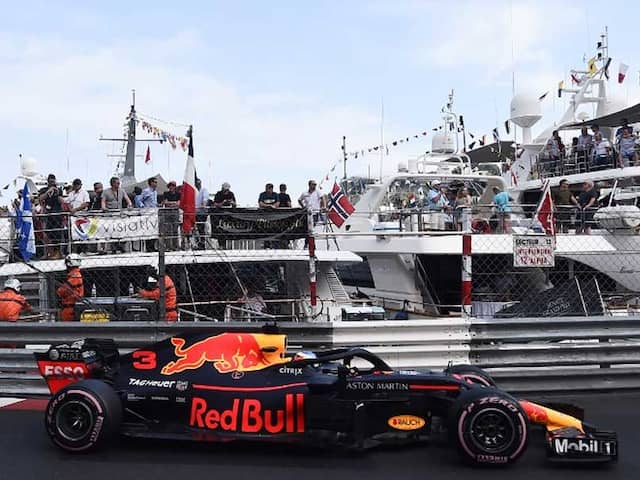 Daniel Ricciardo became the first man into the 1:11s at Monaco© AFP

Record-breaking Daniel Ricciardo made it a "double top" for Red Bull on Thursday when he and team-mate Max Verstappen dominated second practice for the Monaco Grand Prix. The Australian lapped the unforgiving steel-lined streets of the Mediterranean principality in one minute and 11.841 seconds to outpace the Dutchman by nearly two-tenths of a second with the first lap under 1:12 at the track. The pair had earlier dominated morning practice to establish Red Bull as the team to beat this weekend with Ferrari and Mercedes in pursuit. Four-time champion German Sebastian Vettel of Ferrari was third ahead of current series leader and defending four-time champion Briton Lewis Hamilton of Mercedes. The two Finns Kimi Raikkonen of Ferrari and Valtteri Bottas of Mercedes were fifth and sixth.

German Nico Hulkenberg of Renault was seventh ahead of the McLarens of Belgian Pascal Vandoorne and two-time champion Spaniard Fernando Alonso with another Spaniard Carlos Sainz 10th in the second Renault.

It was a clear show of Ricciardo and Red Bull's harmony with the new pink-walled "hyper-soft" tyres at the resurfaced track where their nimble car looked outstanding on warm afternoon.

Early on, Brendon Hartley of Toro Rosso briefly topping the times, the New Zealander emhpasizing his talent after weeks of rumours that he was in danger of losing his seat.

On the most demanding and unforgiving circuit on the calendar, this was a timely riposte, before Vettel gained the top spot for Ferrari.

Vettel was not there long, despite improvements, as Verstappen quickly clocked the first 1:12 lap of the session to move seven-tenths clear of the German.

A red flag then interrupted the action. "Track repair required between Turns Four and Five," said a message from Race Control meaning a drain cover needed fixing between Casino Square and Mirabeau.

After 15 minutes, action resumed. Only Verstappen and the two Mercedes stayed in the pits.

They were soon out to join the near-frenzied traffic, in which the Dutchman clocked a new record in 1:12.035, to go three-tenths clear of team-mate Ricciardo, who responded in record-breaking style.

The Australian, fastest in the morning, had said he was confident of fighting for victory on Sunday. "I feel one got away from me a few years ago," he said.

"So, I'm going to have to work for it, but I would love to have this feeling every race, that we genuinely believe we've got a chance to win.... I'm ready to win."

After trimming his times, Ricciardo became the first man into the 1:11s at Monaco with a lap in 1:11.841, another record and good enough to put him on top of the timesheets.