Michael Schumacher remains in a medically induced coma since the accident on December 29 in the French ski resort of Meribel. 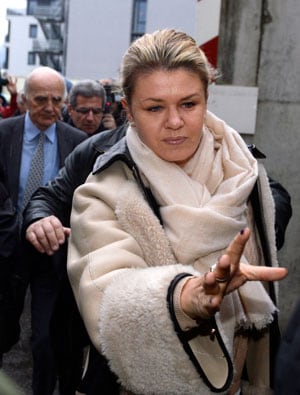 Michael Schumacher's wife called on reporters on Tuesday to stay away from the French hospital where he is being treated for life-threatening injuries from a skiing accident, and to leave her family alone. (Also read: Schumacher's accident probe news conference on Wednesday)

"Please support our shared fight with Michael. It is important to me that you take the pressure off the doctors and the hospital so they can do their work," Corinna Schumacher (in pic) said in a statement addressed "to the media".

"Please have faith in their statements and leave the hospital. Please also leave our family in peace," the wife of the Formula One legend said. (Related: Schumi stable but still critical, say doctors)

The former German champion remains in a medically induced coma since the accident on December 29 in the French ski resort of Meribel, where he owns a chalet. Schumacher's fall has generated massive media interest, with his hospital in the French city of Grenoble under siege by reporters and photographers.

A source close to Schumacher said on Monday he had seen a "slight improvement", after doctors said he was still in a stable but critical condition. Following a flurry of media speculation about his condition, the team treating him said they would give no details of the treatment the 45-year-old is receiving in order to protect his right to privacy.

Comments
Topics mentioned in this article
Formula 1 Michael Schumacher Ferrari Benetton
Get the latest updates on IPL 2020, check out the IPL Schedule for 2020 and Indian Premier League (IPL) Cricket live score . Like us on Facebook or follow us on Twitter for more sports updates. You can also download the NDTV Cricket app for Android or iOS.