The 44-year-old Schumacher auctioned a signed race suit and when it reached 50,000 euros, the German Formula One legend vowed to increase the donation ten-fold. 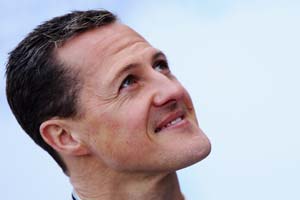 Seven-times Formula One world champion Michael Schumacher has pledged 500,000 euros ($670,000, Â£430,000) to victims of the recent flooding which caused havoc in southern Germany, it was reported on Wednesday.

Germany was one of a number of central European countries badly affected by flooding after both the Elbe and Danube rivers reached record highs because of heavy rainfall earlier this month.

German Chancellor Angela Merkel has pledged eight billion euros to help her country's victims, who were forced out of their homes by the rising waters.

The 44-year-old Schumacher auctioned a signed race suit and when it reached 50,000 euros, the German Formula One legend vowed to increase the donation ten-fold.

"As promised, Corinna (his wife) and I will match that figure ten-fold to half a million euros," Schumacher, who retired for a second time at the end of the 2012 season, told German daily Bild.

"Of course, we are aware that this is only a small part of the great mass of donations but we have been impressed by the solidarity and we wanted to encourage others to participate."

This is not the first time Schumacher has donated considerable amounts to charity after natural disasters.

Comments
Topics mentioned in this article
Formula 1 McLaren Michael Schumacher Sepang Honda Giancarlo Fisichella Lewis Hamilton Brawn
Get the latest updates on Fifa Worldcup 2022 and check out  Fifa World Cup Schedule, Stats and Live Cricket Score. Like us on Facebook or follow us on Twitter for more sports updates. You can also download the NDTV Cricket app for Android or iOS.