Mark Webber to shun team orders and go for win

Vettel who? Mark Webber says his teammate may be gunning for the driver's championship title but adds that he will not be conceding his position to the German. 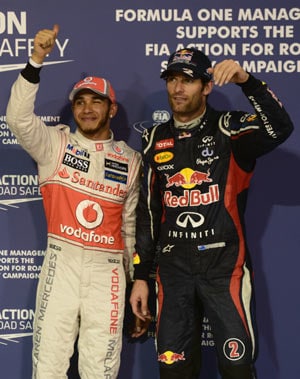 Mark Webber said he is ready for some 'local difficulties' within the Red Bull team in Sunday's Abu Dhabi Grand Prix when he will push to win and not consider supporting team-mate Sebastian Vettel's bid for the drivers' world title.

The Australian made this clear after qualifying second behind Lewis Hamilton of McLaren and one place ahead of Vettel.

Asked if he expected to have to obey team orders, that might request him to concede his position to title leader Vettel, Webber gave a steely response.

He also referred to 'some friendly fire' that needed to be resolved in the team and talked about a need for the team to sort out mounting reliability problems with three races of this year's 20-race championship remaining.

Webber has only a slim outside chance in the title race.

While Vettel is 13 points ahead of nearest rival Spaniard Fernando Alonso of Ferrari, Webber is trailing in fourth place with a deficit of 75 points.

"We realise we have to work on our reliability," Webber acknowledged after a combination of brake problems and others had affected both his and Vettel's preparations.

"We have had a few issues of late. It is something the group is on and there is nothing Seb and I can do about it.

He added: "Lewis's starts lately haven't been phenomenal so let's see if he has a good one tomorrow...

"We will see how they get off the line, but I am looking to go forward for sure.

"Credit to Lewis and McLaren. They have a quick car this weekend. They had momentum six to eight weeks ago and we knocked them off.

"We have a bit of friendly fire that we need to tidy up, but this team is exceptional and we know what we need."

Comments
Topics mentioned in this article
Sebastian Vettel Red Bull Mark Webber Lewis Hamilton McLaren Formula 1 Abu Dhabi Grand Prix
Get the latest Cricket news, check out the India cricket schedule, Cricket live score . Like us on Facebook or follow us on Twitter for more sports updates. You can also download the NDTV Cricket app for Android or iOS.