Lewis Hamilton led from pole to chequered flag, with Max Verstappen more than eight seconds behind and Sebastian Vettel a distant third. 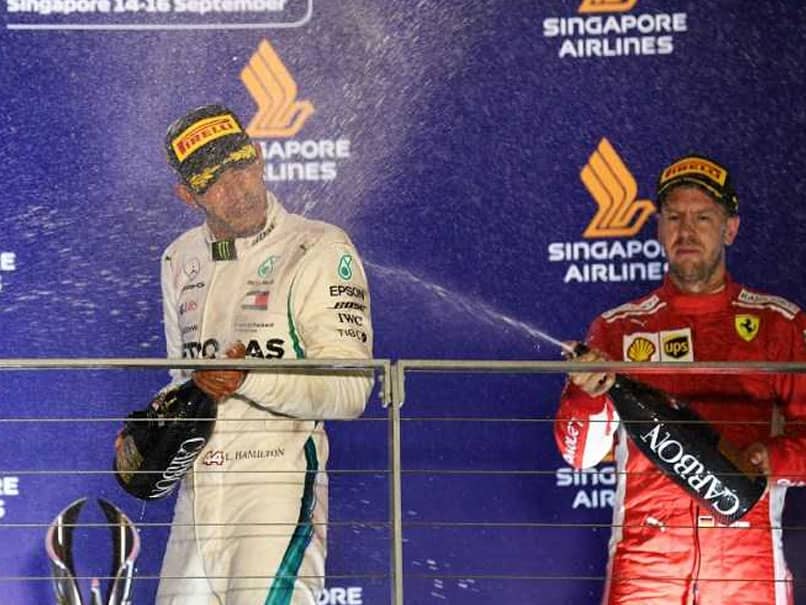 Lewis Hamilton won the Singapore Grand Prix on Sunday in dominant fashion to increase his Formula One championship lead over Sebastian Vettel to 40 points with just six races remaining. The Mercedes driver led from pole to chequered flag, with Red Bull's Max Verstappen more than eight seconds behind and Ferrari's Vettel a distant third. "Great job everyone, what a weekend," said Hamilton on team radio immediately after winning at the Marina Bay Street Circuit for the second year running. "Keep pushing - we've got this guys."

A unique set of challenges makes the steamy track in the heat and humidity of Singapore's tropical climate the toughest physical test of the season.

The duration of the race, with each of the 61 laps of the 5.063 kilometre track having 23 bends and 80 gear changes - more than any other on the Formula One calendar - means that drivers and machinery are worked to a breaking point.

"I'm spent. It felt like the longest race of my life so I'm glad it's over," said Hamilton when interviewed on track after hugging his crew in celebration. "Max put up a great fight as well - but what a day, what a weekend."

Hamilton got the perfect start from pole position as Verstappen was slower away from second on the dirty side of the grid and saw his Red Bull come immediately under pressure from Vettel.

The German four-time world champion used his superior Ferrari power to outdrag Verstappen down Raffles Boulevard and just managed to nip past the Dutchman before the safety car brought a temporary halt to hostilities on the first lap for the third year in succession in Singapore.

It was prompted by a collision between the Force Indias that put Esteban Ocon into the wall and out of the race after a sideswipe from teammate Sergio Perez.

Hamilton controlled the restart four laps later to sprint away more than a second clear of Vettel.

The championship leader had stretched his lead to around three seconds when, on lap 14, Vettel was first to pit for ultrasoft tyres, but it soon looked an ill-judged move as he rejoined behind the slower Force India of Perez.

Hamilton responded immediately and pitted on the next lap, but he crucially opted for the soft compound that had been predicted to last until the end.

Vettel's frustration increased as Hamilton rejoined in front and then boiled over as Verstappen jumped him when he too pitted for softs.

There's "no chance" of winning, Vettel moaned over team radio.

"We were too late again," he bawled. "These tyres will not make it to the end."

When the last of the front-runners Daniel Ricciardo took on ultrasofts on lap 27, it left the top six back in grid order: Hamilton leading, Verstappen second and Vettel third.

Hamilton remained in control but was getting twitchy up front. "I feel we have stopped too early," he said, as a few spots of rain began to tumble around the circuit.

"No we are looking good compared to those around us," assured his race engineer Peter Bonnington.

Hamilton withstood a challenge from Verstappen as the pair threaded their way through some back markers.

But after that Hamilton cruised to victory, despite reporting that he had to push hard "to keep temperature in these tyres".

Max Verstappen Marina Bay Singapore Grand Prix Formula 1
Get the latest updates on India vs Australia Series, check out the India vs Australia Schedule for 2020-21 and Ind vs Aus live score . Like us on Facebook or follow us on Twitter for more sports updates. You can also download the NDTV Cricket app for Android or iOS.