Lewis Hamilton won the Formula 1 drivers' championship in 2014 and 2015 in the Mercedes. 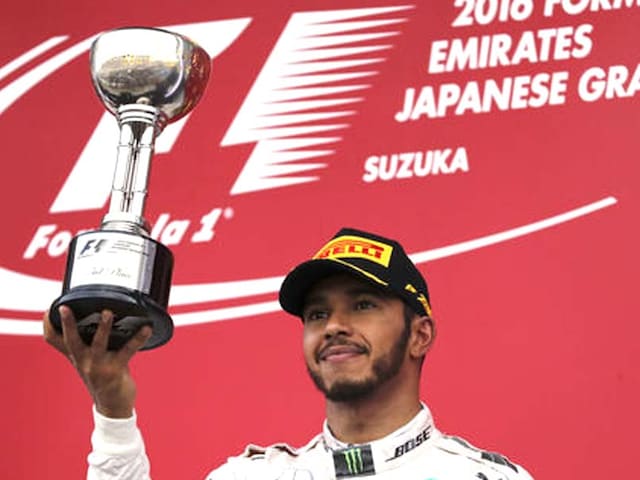 Lewis Hamilton will take the Formula One title race down to the wire, insisted Mercedes boss Toto Wolff after the Briton was floored by a rampant Nico Rosberg in Japan.

Rosberg has opened a 33-point lead over his British foe with just four races left and will take some stopping in this form.

But while Hamilton's hopes of retaining his crown were left hanging by a thread, Wolff predicted a backlash from the triple world champion.

"It's not over," said the Austrian, who barely had time to savour a third successive constructors' title for Mercedes in Japan.

"Lewis is going to come back strong, he needs the enemy sometimes. That's how he functions."

Rosberg dominated all weekend at Suzuka as Hamilton appeared to lose the plot.

The Briton hinted that sabotage may have been to blame for the engine blaze that cruelly robbed him of a certain victory in Malaysia a week earlier, much to the dismay of his Mercedes team.

Hamilton's behaviour grew increasingly bizarre in Japan, where he battled back to take third after a horror start saw him fall back to eighth.

He snubbed media after being widely criticised for fiddling with his mobile phone and uploading bunny-ear photos to Snapchat during an official FIA press conference.

British tabloids duly let rip at Hamilton, one labelling him "Snap-Prat" and another "Berk in the Merc" -- slang terms for "fool".

LH: Nico did a great job today and he has a healthy margin now, so the Drivers' Championship has got harder for me. #F1 #TheTriple pic.twitter.com/TARCS1l9EV

Hamilton failed to see the funny side and walked out on journalists after threatening to reduce his future media activities.

"The smiles on your faces will be no longer," he sneered, before stomping off.

A 100th podium was scant consolation for Hamilton, who cut a forlorn figure as Rosberg toasted a ninth victory of the year and his fourth in five races.

However, Wolff backed Hamilton to rediscover his mojo and push Rosberg all the way.

"Lewis functions best when he is under pressure and he has a target," he said. "I have no doubt this will be an intense fight. It's going to go down to the end.

"Just after the race is not the right moment to put the finger where it hurts," he added, looking forward to the next race in Austin, Texas, in two weeks.

"We need to calm down and find out what happened. Our main emphasis will be building Lewis up. We have 10 days before Austin, it's not a rush like last week."

But the German has suffered his share of heartbreak at the hands of Hamilton and rejected the notion he has one hand on his first Formula One crown.

LH: Unfortunately I wasn't able to take second but I did the best job I could out there today. #F1 #TheTriple #JapaneseGP pic.twitter.com/OyJKQPDD2H

"I'm well aware of the 33 points but there are still many races to go so I'm just keeping my head down," said Rosberg, whose Finnish father Keke won the title in 1982.

"I haven't seen any self-destruction (from Hamilton) -- anyways, it's about getting the best out of myself and not focusing on what Lewis's state of mind is."