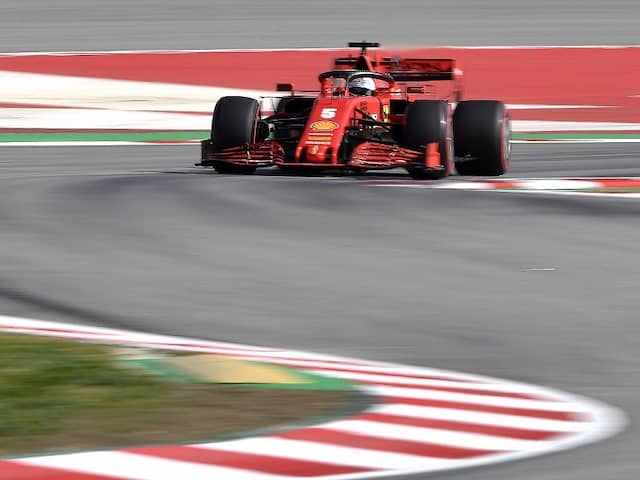 Sebastian Vettel was the fastest man on the circuit in his Ferrari.© AFP

World champion Lewis Hamilton shrugged off an uncharacteristic engine failure in his all-conquering Mercedes on Thursday, pledging to restore order when pre-season Formula One testing concludes Friday. Hamilton only completed 14 laps before his afternoon run at Montmelo came to a premature end after an oil pressure problem shut him down.

"I only got 14 laps in today, but during those 14 laps, everything was feeling fine," said Hamilton who will aim to equal Michael Schumacher's all-time mark of seven world titles this year.

"Rather than looking at the negatives, we've discovered some things we need to work on, and we'll keep pushing hard to resolve them and keep working away.

"I'm looking forward to being back in the car tomorrow morning and adding to the mileage we've already achieved."

Teammate Valtteri Bottas, who edged Hamilton for the fastest time in last week's opening session at the same track, was seventh fastest Thursday.

Four-time world champion Sebastian Vettel was the fastest man on the circuit in his Ferrari in 1min 16.841 sec off an energy-sapping 145 laps.

The German was the only driver below 1min 17sec despite spinning off at one stage.

"I think we are anticipating in the past days that we are not sufficiently fast," Ferrari team principal Mattia Binotto told Sky F1.

"The timing today, when looking at the race simulations, we have not been the fastest.

"The season will be very long, so let's complete the test, let's see tomorrow with Charles (Leclerc), let's try to better understand the car and certainly address what's necessary to do."

Pierre Gasly in an AlphaTauri and Racing Point's Lance Stroll filled out the top three.

Pre-season testing concludes on Friday with the world championship season getting underway in Melbourne on March 15.