Lewis Hamilton resisted intense race-long pressure on Sunday to secure a narrow, dramatic and emotional victory for Mercedes at the Monaco Grand Prix. 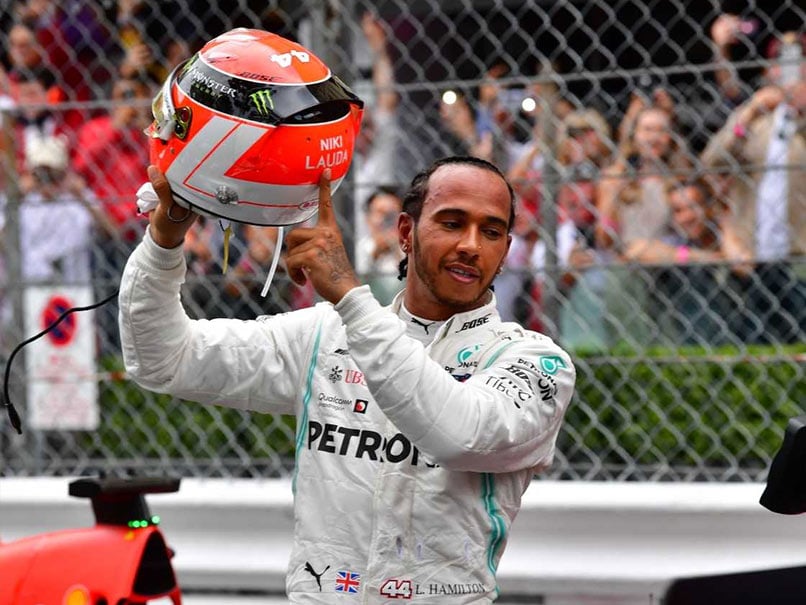 It was Lewis Hamilton's third win in Monaco and the 77th win of his career.© AFP

Lewis Hamilton resisted intense race-long pressure on Sunday to secure a narrow, dramatic and emotional victory for Mercedes at the Monaco Grand Prix. The defending five-time world champion and current series leader, who came home less than a second ahead of Red Bull's Max Verstappen, said he survived the Dutchman's late attacks by "fighting with the spirit of Niki (Lauda)". He lifted his red helmet in tribute to the three-time champion Austrian and non-executive chairman of Mercedes who died on Monday.

Verstappen, who was involved a pit-lane collision with Valtteri Bottasduring the race, was classified fourth after taking a five seconds penalty. This elevated four-time champion Sebastian Vettel to second for Ferrari and lifted the luckless Bottas to third in the second Mercedes. Both joined Hamilton in donning red 'Niki' hats in tribute to Lauda for the podium ceremonies.

"That was the hardest race I think I've had," said Hamilton. "I was fighting with the spirit of Niki. He's been truly an influential person in our team and we miss him."

Daniel Ricciardo, last year's winner for Red Bull, was ninth for Renault ahead of Romain Grosjean of Haas.

It was Hamilton's third win in Monaco and the 77th win of his career opening up a clear lead in the title race.

The result extended Mercedes' run of season-opening wins to six, but brought an end to their sequence of one-two triumphs, buoying up Ferrari despite another mixed weekend that saw local hero Charles Leclerc, who started 15th, retire in the opening stages.

At the start, Hamilton led Bottas through Sainte Devote and up the hill, the pair maintaining a Silver Arrows one-two ahead of Verstappen into Casino Square.

Sporting a new red helmet in tribute Lauda, Hamilton raced with all the elan shown in securing his 85th pole on Saturday while his team wore black armbands and, like many others, carried messages on their cars, a poignant sight after a pre-race minute's silence had created a sombre mood.

Leclerc, near the back of the grid following Ferrari's qualifying bungles, was 13th after two laps and 12th on lap eight when he swept inside Grosjean at Rascasse. As rain fell, his Monegasque fans leapt in celebration.

But a lap later, trying to pass Nico Hulkenberg's Renault, he made contact and spun, puncturing his right rear tyre against the barriers. Leclerc limped back to the Ferrari pits as a safety car was deployed.

"The tyres are starting to fall apart," warned Hamilton, before Mercedes double-stacked his pit-stop with Bottas. Verstappen came in with them and was released alongside Bottas, forcing the Finn into the barriers as he stole second place.

The stewards gave Verstappen a five-second penalty, announced on lap 22. By then, Leclerc's cameo was done, the showman retiring with his "terrible" car.

Verstappen's collision with Bottas had caused a puncture for the Finn who had to pit again for new hard tyres. He re-joined fourth behind Vettel as Hamilton led the rampant Dutchman.

Verstappen pushed Hamilton, who complained his front left was "opening up", to maximum concentration.

By lap 42, Hamilton led him by six-tenths with Vettel third, 1.7 seconds adrift, ahead of Bottas. "I feel like I have the wrong tyre on," said Hamilton, running on mediums. "No, it's all fine," replied Mercedes.

"I think I'm in big trouble guys," Hamilton repeated, on lap 50, to be told Mercedes had no intention of pitting again. Lapping back markers had slowed him, allowing the top four to close within four seconds.

Yet he stayed half a second ahead and resisted a lunge from the Dutchman on lap 76. They touched, but continued, Hamilton cutting the chicane to retain the initiative and win.

Valtteri Bottas
Get the latest updates on IPL 2021, check out the IPL 2021 Schedule and Indian Premier League Live Score . Like us on Facebook or follow us on Twitter for more sports updates. You can also download the NDTV Cricket app for Android or iOS.