"If we get pole it will be fantastic, but we shouldn't get our hopes up," says the McLaren driver. 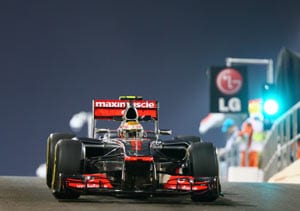 Despite topping the times after first practice and running only one-tenth of a second off the 25-year-old German's pace in the second session, Hamilton said he had struggled with his car, notably on the softer tyres.

He added that there had been no significant upgrades for his McLaren car and that his only real hope of taking pole rested on Vettel making mistakes.

Hamilton said: "If we get pole it will be fantastic, but we shouldn't get our hopes up -- Sebastian has a faster car. Nothing has changed. We have not improved so I don't know why anyone thinks we can beat them (Red Bull). It's not the case.

"The reason I say that is because the last four races have been won by a certain guy and (his) car is very quick around here, but I'm going to give it my all, everything I can, and hope maybe his lap isn't so great and mine is. If we get ahead it will be a huge bonus for us."

Hamilton was six-tenths faster than his McLaren team-mate and Jenson Button, in third place.

He added that he was happy with his car on the harder 'prime' tyres.

He explained: "We seemed quite good in P1, but P2 was a bit of a struggle for me. It was very difficult to get the time (on the option) - we had a good time on the prime, but people seemed to find eight-tenths on the option and I wasn't able to get any time out of it.

"I don't really know why - perhaps it's about switching the tyres on.

"I expected that Sebastian would all of a sudden go very quickly. I don't know what they do in the first session, but I guess they're cruising and then second session they switch everything on.

"They picked up some good pace. I generally didn't have great pace, I was struggling with the car. I'm, not really sure why, but we have plenty of time to figure it out."

Hamilton reflected also on the time he spent in India earlier this week, following the Indian Grand Prix, when he stayed on for two days to work with the United Nations' charity for children UNICEF.

Asked about the experience and to compare what he saw in India with Abu Dhabi, he said: "It's a billion miles apart. Literally opposite ends of the scope. It was very, very sad to see.

"I got to see an issue that not many people are conscious of....there were ladies having babies on the streets and malnourished kids that are just allowed to die.

"No-one comes to the rescue, these babies don't have a chance, and that's insane given there is enough wealth to go around. My visit will make the smallest of differences, if at all, but it all starts with one step...."