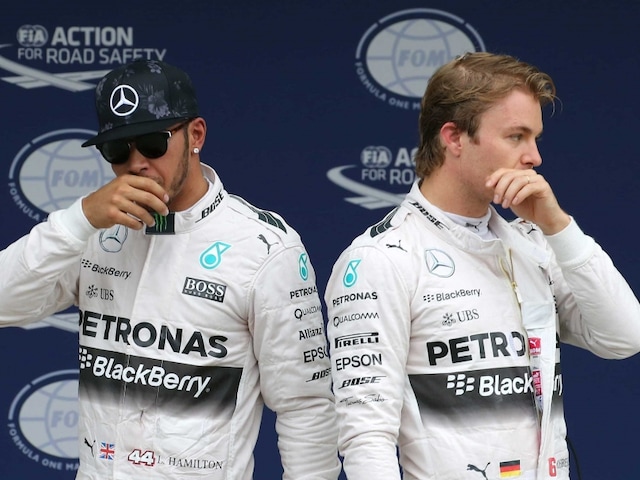 Mercedes drivers Lewis Hamilton and Nico Rosberg have been involved in quite a few clashes in the past one season.© AFP

Lewis Hamilton and Nico Rosberg may face team orders and the eruption of another noisy controversy when they arrive at Silverstone on Thursday ahead of this weekend's keenly-anticipated British Grand Prix.

Speaking while angry and frustrated after Sunday's race, Wolff described his drivers as "brainless" and said he and Mercedes were prepared to introduce team orders if necessary. "It is on the table now," he said.

He may need to do the same to control other parts of his team after non-executive chairman Niki Lauda was widely quoted on Tuesday saying that Hamilton had "destroyed" his room in the Mercedes offices at the European Grand Prix in Baku and had lied about the state of his relationship with Rosberg in a newspaper interview.

Twenty-four hours later, in a statement issued by the team on his behalf, Lauda was apparently back-tracking from those statements, as aired by Red Bull's channel Servus TV during a chat show.

"Niki regrets any misunderstanding caused by comments that have been blown wildly out of proportion compared with the casual context in which they were made," said the Mercedes statement.

It made clear also that Hamilton "did not in any way damage a hotel room or his private driver room at the circuit the race weekend in Baku" and "did not lie about his relationship" with Rosberg.

The Lauda intervention, on top of events at Spielberg last weekend, was another self-inflicted wound that heaped more pressure on the team as they struggle to find a way to manage the rivalry between their drivers as they fight for the world title.

Just three days after his dramatic win in Austria, Hamilton will aim to complete a home hat-trick with a fourth Silverstone victory, after wins in 2008, 2014 and 2015, to go top in this year's title race.

HAMILTON: "We're still able to race, no team orders, which is great for the fans" #BritishGP #F1 pic.twitter.com/OBHjSL4orf

Hamilton has made clear he is against team orders and is concerned at how such a decision would be seen by the fans at Silverstone, if he is not allowed to race Rosberg. The German said he would abide by the team's instructions.

Rosberg leads the championship with 153 points, 11 ahead of Hamilton on 142, but both know that Ferrari drivers Sebastian Vettel and Kimi Raikkonen, on 96, represent a serious threat to their hopes.

Ferrari have won only twice at Silverstone in 11 years since 2004, Raikkonen and Fernando Alonso triumphing in 2007 and 2011 respectively, and are under pressure to register a first triumph in 2016.

Red Bull are also expected to be strong contenders on home soil together with Force India, whose headquarters are only 100 metres from the circuit's main entrance, and Williams.

But the focus will be on Mercedes as their period of strife continues.

Comments
Topics mentioned in this article
Mercedes Lewis Hamilton Nico Rosberg Austrian Grand Prix British Grand Prix Silverstone Formula 1
Get the latest updates on IPL 2020, check out the IPL Schedule for 2020 and Indian Premier League (IPL) Cricket live score . Like us on Facebook or follow us on Twitter for more sports updates. You can also download the NDTV Cricket app for Android or iOS.