McLaren's Lewis Hamilton is hoping for a win after making the front row in qualifying for Sunday's Formula One United States Grand Prix. 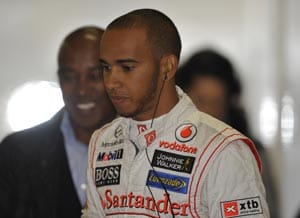 McLaren's Lewis Hamilton is hoping for a win after making the front row in qualifying for Sunday's Formula One United States Grand Prix.

The 27-year-old, who will drive for Mercedes GP from next season, clocked one minute, 35.766 seconds at the Circuit Of The Americas to finish behind Red Bull's Vettel who took pole in 1:35.657, CMC reports.

"I came here this weekend to push almost beyond the limit and that approach seemed to work in qualifying. I gave it everything," said Hamilton.

The Brit is already out of contention for the World championship after a series of mechanical failures in recent months which left him out of the points.

He lies fifth on 165 points, 90 adrift of leader Vettel who is closing in on his third consecutive drivers title.

Without a win since Monza in early September, Hamilton said he was still keen on reaching the podium Sunday.

"Hopefully tomorrow is just about getting a good start. It's so wide in Turn One, I don't think really much can go wrong there generally," he mused.

"Obviously I don't want to get in the way of Sebastian's race. However, I do want to win, so I'll try my best to get through cleanly."

Comments
Topics mentioned in this article
Formula 1 United States Grand Prix Lewis Hamilton McLaren
Get the latest updates on IPL 2020, check out the IPL Schedule for 2020 and Indian Premier League (IPL) Cricket live score . Like us on Facebook or follow us on Twitter for more sports updates. You can also download the NDTV Cricket app for Android or iOS.