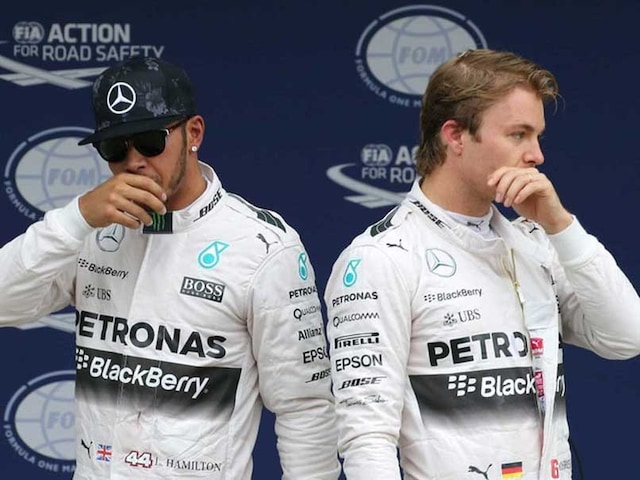 Nico Rosberg's (right) rivalry with Lewis Hamilton has been the highlight of this F1 season.© AFP

Nico Rosberg sat slumped in his chair, exhausted and exasperated after another race and world title was taken away by Mercedes teammate Lewis Hamilton. Then came the hat toss seen around the world.

These friends-turned rivals return to Texas and the U.S. Grand Prix in very different places this week. This time, it's Rosberg with the big lead and Hamilton running out of time if he hopes to retain his Formula One championship.

Rosberg leads Hamilton by 33 points with four races left on the schedule. That means Hamilton has to make a big push starting Sunday on a track where he's won three of the last four years.

"America has been good hunting ground for me," Hamilton said.

A win streak alone won't do it. Hamilton needs a bad race from Rosberg somewhere. If Rosberg finishes second three times and finishes third once, he'll still claim his first career championship. A Rosberg victory anywhere along the way would all but clinch it.

"My frame of mind at the moment is to have fun," Hamilton said. "I'm determined to win. There's never a day in my life when I don't want to win. I could come here like I've got to win every race, but I've been racing a long time. I know what I'm doing so just go do it the best I can and enjoy." Is that concession?

"Absolutely not," Hamilton said. "There's still 100 points out there. It's possible."

Rosberg may dictate when the end comes. He's been a different driver since his moment of post-race infamy in 2015. After Hamilton clinched last season's title in Austin, he playfully tossed Rosberg his podium cap in the drivers' cool-down room. Rosberg immediately threw it back at him in a petulant moment captured on live television.

The split-second reaction symbolized the meltdown of Rosberg's title efforts and the relationship between two drivers who became friends when they were coming up through the junior circuits.

"Last year this race obviously didn't work out so great for me, so I'm looking forward to getting back out there and doing my best to get it right this time," Rosberg said.

Rosberg emerged from his Austin disaster with steely determination. He won the final three races of 2015 and the first four of 2016. A mid-season slump allowed Hamilton to charge back from a 43-point deficit, but Rosberg has been coolly efficient of late with a run of four wins in the last five races.

Rosberg refused to be pulled into thinking about the pressure facing both drivers or whether he's walking a tightrope of emotion with a title so close within reach. His father, Keke Rosberg, won the championship in 1982.

"I don't know how much pressure Lewis is putting on himself ... I'm going to focus on this weekend," Rosberg said. Rosberg also said he won't settle for the safety of second place on Sunday.

Hamilton's title hopes took a huge dent two races ago in Malaysia when he was leading late but was forced to retire with an engine problem. Hamilton looked dejected when he got out of the car day and said it felt like "something or someone" was working against him.

"A higher power," he later said. "It feels right now that the man above or any higher power is intervening a little bit. Like the previous two seasons, Mercedes has dominated the field with 15 wins in 17 races. No other driver has factored into the title chase.

If he loses the title, Hamilton said he'll "try to take it like a man because you can't win them all."