Formula One driver Robert Kubica is proving to be a model patient as he recovers from injuries sustained in February's horror crash. 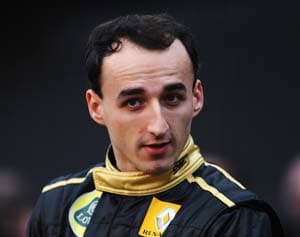 Formula One driver Robert Kubica is proving to be a model patient as he recovers from injuries sustained in February's horror crash.

The Lotus Renault driver almost lost his right arm and hand from the high speed accident in a rally in Italy, with the Pole requiring four bouts of surgery.

"He is ahead of schedule on all the forecasts, whether to do with rehabilitation or recovery."

Boullier added: "He is proving an example to the hospital. The doctors are supporting him. He is extremely motivated, he has the morale, even if it's not rosy every day overall he is maintaining exceptional spirits."

With Kubica sidelined for an indeterminate length of time, his place on the grid has been handed to German driver Nick Heidfeld.

The 2011 F1 season opens with the Australian Grand Prix in Melbourne on March 27.

Comments
Topics mentioned in this article
Formula 1 Renault Robert Kubica Bahrain Grand Prix Karun Chandhok McLaren Michael Schumacher Brawn Honda Giancarlo Fisichella Lewis Hamilton Sepang
Get the latest updates on ICC T20 Worldcup 2022 and CWG 2022 check out the Schedule, Live Score and Medals Tally. Like us on Facebook or follow us on Twitter for more sports updates. You can also download the NDTV Cricket app for Android or iOS.