Vettel's Red Bull team-mate Mark Webber was third-fastest in qualifying but a 10-place grid penalty from the previous race relegates him to 13th. 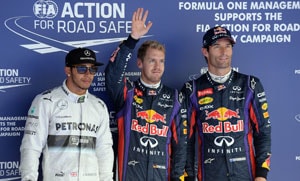 Vettel's Red Bull team-mate Mark Webber was third fastest in qualifying for Sunday's grand prix but a 10-place grid penalty from the previous race in Singapore relegates him to a lowly 13th.

In-form Romain Grosjean of Lotus was fourth fastest at a sparse and increasingly overcast Yeongam circuit, ahead of Hamilton's team-mate Nico Rosberg.

They will line up together on the second row because of Webber's reprimand for hitching a lift with Ferrari's Fernando Alonso at the end of the Singapore race two weeks ago.

Alonso, who is the closest challenger to Vettel in the title race but still a hefty 60 points behind with six races left, was sixth fastest.

His team-mate Felipe Massa, Nico Hulkenberg and Esteban Gutierrez, both of Sauber, and the Lotus of Kimi Raikkonen rounded out the top 10.

Vettel's third pole position on the trot came courtesy of a scorching time of 1min 37.202sec, edging out Hamilton with 1min 37.420sec.

Victory on Sunday for Vettel, 26, would see him put one hand on the drivers' crown -- for what would be his fourth world title in a row.

The peerless German clenched his fist and held up a single finger to signal his status as undisputed number one as he returned from his lightning lap.

And he even appeared to share a joke with Australian team-mate Webber -- a rare moment of camaraderie between two rivals whose always difficult relationship hit new lows earlier this season when Vettel ignored team orders and overtook Webber to win in Malaysia.

"I think as expected Mercedes was pretty strong. I think they feel pretty comfortable in the middle sector so it's a tight battle," said Vettel, who has been booed in recent races, such is his dominance in winning the last three grands prix.

"We have got the balance (of the car) right this weekend. I wasn't entirely happy with the car yesterday after practice. But all in all we can be very happy with what we achieved so that's why I was pretty happy after qualifying."

Vettel appeared unconcerned about forecasters predicting a chance of rain on Sunday.

"I don't really mind," he said. "It is not a disaster if it starts to rain. Tomorrow should be fine in terms of conditions, whether it is dry or wet.

"We did a good job today and looking forward to tomorrow."

Organisers say there is a 40 percent chance of rain at the remote circuit, which is nestled next to the Yellow Sea.

It was a wretched qualifying session for former world champion Jenson Button and Sergio Perez of McLaren, whose difficult season took another turn for the worse when they failed to make the top-10 shoot-out.

With most the drivers switching to super-soft tyres, Q2 belonged to Mercedes at first, before Vettel made his move late on to usurp Hamilton at the top of the charts -- a place he would never relinquish.

Rosberg and Hamilton, then Hulkenberg and Raikkonen, had set the early pace in Q1, swapping best times, as Vettel and Webber appeared content to play a waiting game initially.

Paul Di Resta of Force India just survived being eliminated in Q1, but could not avoid the same fate in Q2, going out along with team-mate Adrian Sutil.

Hamilton, whose debut season at Mercedes has been in danger of fizzling out after finishing ninth and fifth in the last two races, was pleased to be in the top three.

"I'm happy and happy to be here for sure. I'm happy that the car is just as competitive as it is and the guys have done such a good job to get us up this high.

"I'm happy with the week and the performance so far this weekend and I think there is more to come."