Under blue skies at the Yeongam circuit Lotus driver Raikkonen, fourth in the title race, was only eighth quickest in both sessions and span off towards the end of the morning practice, slamming into a wall. 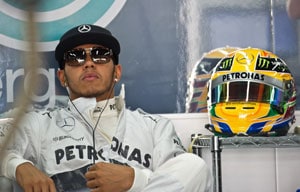 Lewis Hamilton was fastest in both free practice sessions for the Korean Grand Prix Friday as Kimi Raikkonen escaped a heavy crash in the opening run-out.

Britain's Hamilton, whose debut season for Mercedes is in danger of petering out, nudged Red Bull's world championship leader Sebastian Vettel into second in both sessions.

Vettel, 60 points ahead in the standings and firmly on course for a fourth world title in a row, was 0.108sec off Hamilton's best time of 1min 38.673sec in the second outing.

Hamilton, the 2008 world champion, said: "I was very happy with how the sessions went today and it's the first time I can remember that second practice has really gone well for me.

"We haven't changed anything but the day just went smoothly and all the processes with the team worked well.

"I love this track: it was clean from the start, it provides good racing on Sunday afternoon and it just gets harder and harder through the lap."

Under blue skies at the Yeongam circuit Lotus driver Raikkonen, fourth in the title race, was only eighth quickest in both sessions and spun off towards the end of the morning practice, slamming into a wall.

The Ferrari-bound Raikkonen appeared unharmed and he was back in action in the afternoon, but the incident will spark fresh concern over his long-term back injury which flared again last month in Singapore.

Asked by AFP if he had had any problems with his back during practice, Raikkonen said: "No, it was okay."

He also played down the crash, saying he just lost control of his Lotus on a corner.

Earlier, there had been heads in hands in the Lotus pit after the team watched images of him careering into the concrete wall, damaging the nose of his car.

Asked by one of his engineers what happened, the famously terse Raikkonen replied sardonically over the team radio: "I hit the wall."

Felipe Massa was fifth but the fellow Ferrari of Fernando Alonso, Vettel's nearest rival in the world championship, was down in seventh after an error-strewn run.

Raikkonen's team-mate Romain Grosjean was sixth-fastest, with McLaren's Jenson Button and Adrian Sutil of Force India rounding out the top 10.

Runaway championship leader Vettel said there was "some room for improvement.

"It will be close with Mercedes. Of course we're not sure what others were doing with their fuel loads today, but it seems close ahead of tomorrow's qualifying."

Comments
Topics mentioned in this article
Formula 1 Sebastian Vettel Kimi Raikkonen Narain Karthikeyan Rubens Barrichello Lewis Hamilton Chinese Grand Prix Korean Grand Prix Ferrari McLaren
Get the latest updates on ICC T20 Worldcup 2022 and CWG 2022 check out the Schedule, Live Score and Medals Tally. Like us on Facebook or follow us on Twitter for more sports updates. You can also download the NDTV Cricket app for Android or iOS.