Jarno Trulli has accused Italy of burying its head in the sand and failing to foresee or stave off the current situation that has left the country without a Formula One driver for the first time since 1969. 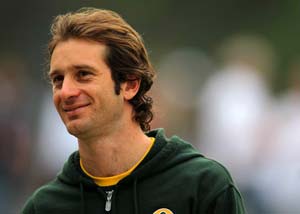 Jarno Trulli has accused Italy of burying its head in the sand and failing to foresee or stave off the current situation that has left the country without a Formula One driver for the first time since 1969.

The 37-year-old has been ditched by Caterham in favour of Vitaly Petrov, just two weeks after Vitantonio Liuzzi was dumped by Hispania.

It means Formula One's only Italian representatives this season will be constructors Ferrari and Toro Rosso.

For Trulli, though, this is a situation that his country should have seen coming.

"It's a shame to have Formula One without any Italian drivers, I'm disappointed but it's not my problem," Trulli told Ansa.

"Others need to take responsibility for this penury, something which didn't start yesterday but upon which everyone has been sleeping.

"In Italy we don't have a system that helps drivers to reach the top level so it's normal that we've arrived in a situation such as this.

"There is talent but if they're not supported by anyone then they don't have any hope.

"I want to see more involvement from everyone but during a crisis as we have in our country, I can't see how a youngster can find the help needed to be considered by any team."

And Trulli claimed that a team like Caterham, who were rebranded this season from Team Lotus, cannot afford to overlook drivers who bring with them significant financial backing from personal sponsors.

"I'm not personally disappointed, I was ready for the divorce with Caterham and I knew of the difficult economic situation that would force the team to look for a driver with adequate backing," said the Italian.

"The small teams have certain needs and contracts speak for themselves.

"I hope that with Petrov's contribution everyone who works there can have a more tranquil future."

Ferrari Team Principal Stefano Domenicali insisted his team were trying to find the next generation of Italian drivers.

"I'm very disappointed that after so many years there is no longer an Italian driver in the Formula One World Championship list," he said.

"I say that from a sporting perspective as much as a personal one with regards to Jarno who rarely had a car capable of exploiting his talent.

"It's a difficult time due to external factors but a few years ago we started a long-term project thanks to our Driver Academy to try to develop a new generation of drivers."

Italy produced two of the first three world champions with Giuseppe Farina winning the inaugural F1 season in 1950 and Alberto Ascari claiming back-to-back titles in 1952 and 1953.

However the country has never won another driver's title despite Ferrari being the most successful constructor.

Italy are only ninth on the all-time list of drivers titles with three, a long way behind Great Britain in top spot with 14.