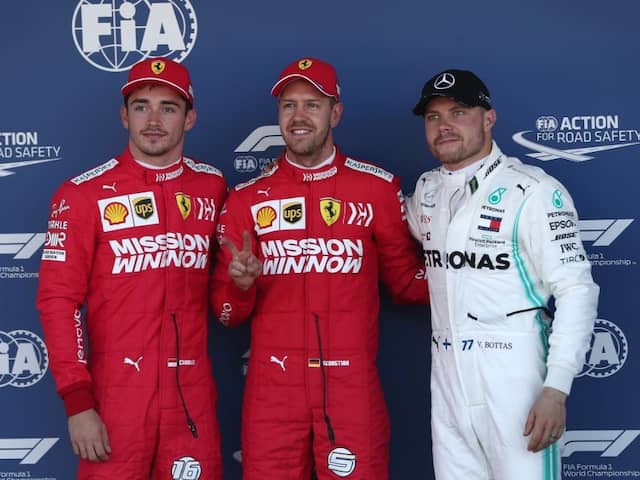 Sebastian Vettel produced an epic lap at Suzuka on Sunday as his Ferrari took pole position for the typhoon-affected Japanese Grand Prix ahead of teammate Charles Leclerc. The German clocked a brilliant 1min 27.064sec, almost two-tenths of a second quicker then Leclerc, in gusty winds at Suzuka after qualifying was postponed from Saturday. The Mercedes pair of Valtteri Bottas and championship leader Lewis Hamilton could only manage third and fourth fastest respectively. "I think we're quite surprised, we didn't expect that, a front row lock-out. Really enjoyed it," said Vettel who produced a perfect lap to outqualify his teammate for the first time in 10 races since the Canadian Grand Prix in June.

"Pole was not possible, Seb was too quick," said Leclerc. "Congratulations to him."

The Mercedes pair had been consistently fastest in Friday practice, and in the first two qualifying sessions on Sunday, but had no answer to Ferrari when it mattered.

"We always knew Ferrari might have something in reserve to turn things up," said Bottas. "Nothing is lost yet, let's see in a few hours."

The session kicked off what was being dubbed "Suzuka Super Sunday" containing both qualifying and the race because of the track having been safely locked down Saturday as Typhoon Hagibis roared past.

The Red Bulls of Max Verstappen and Alex Albon were fifth and sixth with the top 10 being completed by the McLarens of Carlos Sainz and Lando Norris in seventh and eight, the Toro Rosso of Pierre Gasly in ninth and the Haas of Romain Grosjean.

It was only the fifth time in Formula One history that qualifying had taken place on a Sunday, and the third time at Suzuka after the 2004 and 2010 race weekends were also disrupted by inclement weather.

The race will start as originally scheduled at 2.10pm (0510 GMT) after a condensed weekend where Saturday's third practice session was cancelled and qualifying shifted to Sunday morning.

The blowy conditions caught out a few drivers with Robert Kubica becoming the first casualty right at the start of qualifying.

The Williams driver ran wide in the tailwind at turn 18 and crashed his Williams into the barriers opposite the pit lane at the start of his first flying lap to bring out a red flag.

No sooner had the session been restarted then Kevin Magnussen stacked his Haas into the barriers in almost exactly the same place to bring out a second red flag.

Daniel Ricciardo was the first major surprise of the day as his Renault struggled with balance the gusts and could only clock 16th fastest to be eliminated in the first session.

Valtteri Bottas Japanese Grand Prix
Get the latest Cricket news, check out the India cricket schedule, Cricket live score . Like us on Facebook or follow us on Twitter for more sports updates. You can also download the NDTV Cricket app for Android or iOS.