British motor racing legend Sir Jackie Stewart was hospitalised on Wednesday after complaining of chest pains while on-board a flight to London, a report said. 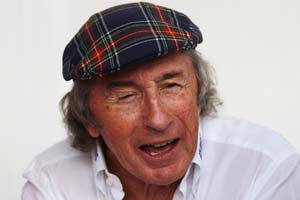 British motor racing legend Sir Jackie Stewart was hospitalised on Wednesday after complaining of chest pains while on-board a flight to London, a report said.

Triple world champion Stewart, 71, was given first aid by British Airways stewardesses after falling ill on a flight to Heathrow from Geneva, where he had attended a motor show, Britain's Press Association agency reported.

Stewart was taken to Hillingdon Hospital in west London after the aircraft was met by paramedics on arrival, the report said.

According to journalists on board the flight, the pilot asked passengers if there were any medical personnel on board, citing a medical emergency.

"Our flight crew requested a priority landing so that a male passenger could receive medical attention immediately on arrival," British Airways said.

"Our cabin crew cared for the customer during the flight. We wish him well."

Stewart's son, Paul, told BBC Sport that his father had been taken to hospital as a precaution after passing out.

"I've just spoken to him in hospital. He seemed absolutely fine but obviously something happened and we need to establish what, but I'm on my way to see him right now," he said.

"I should think he'll just be checked over and hopefully it will be nothing more sinister than that."

Stewart won three world titles during a glittering Formula One career spanning eight years between 1965 and 1973.

The Scottish icon is also renowned as a leading advocate of improved safety standards, campaigning relentlessly throughout his career for better medical and emergency facilities at race circuits.

Comments
Topics mentioned in this article
Formula 1 Jackie Stewart
Get the latest updates on ICC T20 Worldcup 2022 and CWG 2022 check out the Schedule, Live Score and Medals Tally. Like us on Facebook or follow us on Twitter for more sports updates. You can also download the NDTV Cricket app for Android or iOS.