HRT's owners Thesan Capital had earlier this week said they were in talks with potential buyers for the team, which has yet to win a point in three F1 seasons. 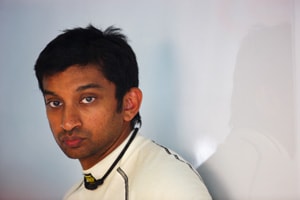 Indian driver Narain Karthikeyan said on Friday he was uncertain about his Formula One future after his Spanish team, HRT, was put up for sale.

HRT's owners Thesan Capital had earlier this week said they were in talks with potential buyers for the team, which has yet to win a point in three F1 seasons.

Karthikeyan, preparing with his HRT co-driver Pedro de la Rosa for this weekend's US Grand Prix in Austin, Texas, said the prospects of a sale had got him worried about his future.

"The plan for me was to stay with HRT for 2013 as it was looking good all along," the 35-year-old from Chennai was quoted as saying in the Times of India.

"As a team we have been making progress and the design for the 2013 car is reasonably competitive. I was quite sure of everything being in place and thus there was no Plan B.

"But everything has turned on its head in the last 24-48 hours as you can imagine. The solution won't arrive overnight.

"I may be forced to look beyond F1 now, so looks like it is going to be a very busy off-season," Karthikeyan told the paper.

Thesan Capital bought HRT in July 2011, but the team has not made an immediate impact, given a limited budget and Cosworth engines that have proved less effective than those of their rivals.

The investment company said it hoped to build on the progress it had made in 2012 and the new owner would be made known in the coming weeks.

Karthikeyan, asked if he would like to see an Indian buy HRT to follow liquor baron Vijay Mallya's Force India team, said: "It will be great for India and F1 to have a second Indian team."