Jaypee Group's total debt is estimated to be around Rs 75,000 crore as on March 31, 2015, going by the report of foreign brokerage firm Credit Suisse 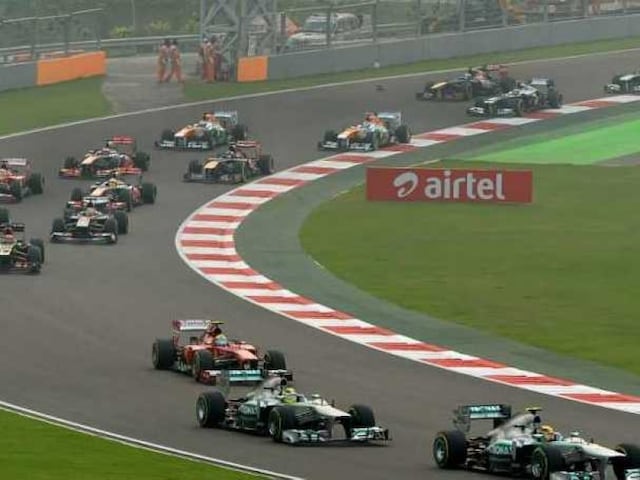 The Indian Grand Prix was dropped after three editions from 2011-2013 owing to tax and bureaucratic hurdles.© AFP

The shelved Formula 1 Indian Grand Prix is unlikely to return to the Buddh International Circuit until the financial health of its debt-ridden promoter Jaypee Group improves, the event's CEO Sameer Gaur has said.

Gaur, who had earlier said that taxation issues surrounding the race will have to be resolved for it to return, now says the Jaypee Group will try to get the race back after the conglomerate is back on track.

The total debt of the Group is estimated to be around Rs, 75,000 crore as on March 31, 2015, going by the report of foreign brokerage firm Credit Suisse.

"There are no immediate plans to get the race back. The main focus is on improving the overall health of the Jaypee Group. As in when the economic scenario improves, we will think about the race," Gaur, CEO of the Jaypee Sports International, told PTI.

Gaur's latest comments do not raise hopes of the race's return but one person who is still positive about India is none other than F1 boss Bernie Ecclestone.

"We would love to return to India when the promoters are ready. F1 was well received in India and it is unfortunate that it had to dropped," Ecclestone told PTI in a recent chat.

The Indian Grand Prix was dropped after three editions from 2011-2013 owing to tax and bureaucratic hurdles. Later in March 2014, Ecclestone revealed that race promoters had not complied with the five-year contract, raising more doubts over the event's future.

The tax case, filed before the first race to ascertain whether Formula One Management's (FOM) income is taxable in India, remains pending in the Bombay High Court. The issue, however, has been put on the backburner by the Jaypee Group in the light of bigger concerns at hand.

Getting the race back looks like a herculean task. Even when the tax issues are sorted out, Jaypee would have to cough up a huge amount as licensing fee to FOM.

It is believed that the Group shelled out around USD 40 million each year for the three races. Considering its current financial health, it is unlikely it will be ready to pay the same huge amount year after year. Lack of government support is also a huge handicap for the race, which in most other countries, is backed by the state.

Scheduling too is always a challenge and it won't be easy to accommodate the Indian Grand Prix on the ever crowded calendar. The 2016 season has as many as 21 races.

Ecclestone, however, insisted that scheduling the India round will not be a problem as long as the promoters are keen to host the race again.

"We will find a way to fit the Indian Grand Prix but first the promoters need to show interest," said Ecclestone.

The Buddh International Circuit, which cost USD 400 million, has become a much quieter venue ever since F1 went away.

With no big international event on its roster, it has mainly become a hotspot for vehicle testing, award nights, functions and odd domestic racing events.

Comments
Topics mentioned in this article
Indian Grand Prix Formula 1
Get the latest updates on IPL 2020, check out the IPL Schedule for 2020 and Indian Premier League (IPL) Cricket live score . Like us on Facebook or follow us on Twitter for more sports updates. You can also download the NDTV Cricket app for Android or iOS.