F1 boss Bernie Ecclestone and Jaypee - race promoters, had a positive meeting and both said that the chances of the sport returning to the Buddh International Circuit in 2016 were bright. 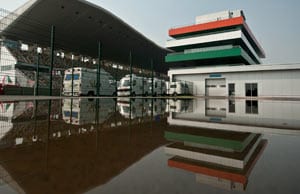 The Indian Grand Prix is expected to return in 2016 as a "fruitful" meeting between Formula One boss Bernie Ecclestone and race promoters has prepared the ground for the comeback of the high-profile event.

The meeting was held on the sidelines of the inaugural Russian Grand Prix in Sochi, last month.

The Indian Grand Prix was dropped from the 2014 calendar after three successful seasons, owing to tax and bureaucratic hurdles, leaving fans and experts to wonder whether the elite global event will comeback at all. The race has already been ruled out for 2015.

The issues surrounding the Grand Prix remain but Ecclestone-led Formula One Management (FOM) and race promoters Jaypee Sports International (JPSI), headed by Sameer Gaur, first want to honour the five-year contract and then work on securing the long-term future of the event.

"We (Sameer and I) had a good meeting in Russia. I was assured that the tax and other related problems will be sorted out in due course and then we are good to go back. It is too late for 2015 now, so we are working on 2016," Ecclestone told PTI from his London office.

Gaur, on his part, said, "Formula 1 remains very important for us. Unfortunately, because of the circumstances we could not do the race this year but I see the situation improving soon. The important thing is that we and FOM are on the same page. 2015 looks tough as the calendar is more or less final, so we should look at 2016 as the year for the race."

Only time will tell how Ecclestone accommodates India on the ever crowded calendar. 2014 will see 20 races with the return of Mexico round and the number could up to 22 in 2016 with India and Azerbaijan waiting to host the F1 caravan.

Comments
Topics mentioned in this article
Indian Grand Prix Buddh Circuit Formula 1
Get the latest Cricket news, check out the India cricket schedule, Cricket live score . Like us on Facebook or follow us on Twitter for more sports updates. You can also download the NDTV Cricket app for Android or iOS.