Home Is Where Heartbreak Is For Struggling Sebastian Vettel

Sebastian Vettel has endured a run of mistakes and disappointments that have thrown his future into doubt and left him languishing in pursuit. 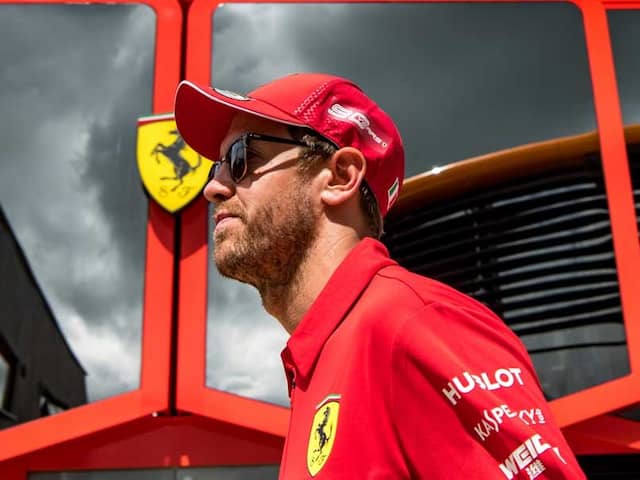 Sebastian Vettel has received support in his difficulties from Lewis Hamilton.© AFP

Spare a thought for Sebastian Vettel this weekend as he and Ferrari hope to push Lewis Hamilton and Mercedes out of the spotlight and off the top of the podium at their home German Grand Prix. Four-time champion Vettel will be seeking to end a miserable "nightmare" year since he crashed out of the lead at last year's German contest and, in the process, handed a remarkable victory and the impetus in the title race to his British rival.

Vettel has won only once, in Belgium last year, since that embarrassment.

Five-time world champion and current series leader Hamilton has not looked back since and leads this year's championship by 39 points, ahead of Mercedes team-mate Valtteri Bottas.

Vettel, who was born at nearby Heppenheim, has endured a run of mistakes and disappointments that have thrown his future into doubt and left him languishing in pursuit.

On top of that, Hamilton is seeking his fifth German triumph this weekend as Mercedes celebrate their 200th start as a constructor and his fourth at Hockenheim, where the luckless Vettel has never won.

His sole German victory came at the Nurburgring in 2013, a year after Ferrari's last triumph on German soil when Fernando Alonso won at Hockenheim in 2012 -- statistics that Vettel, a keen student of his sport, will not enjoy being reminded of as he bids to claim Ferrari's first win since last year's United States Grand Prix.

"I know how it is and I know that we have to make up for last year," conceded Vettel.

"I am looking forward to racing at Hockenheim -- the atmosphere is phenomenal there always and the crowd is great too. I hope we can do something good for them."

Vettel has received support in his difficulties from Hamilton who reeled off another mighty victory, the 80th of his career, at the British Grand Prix where the Ferrari driver crashed into the rear of Max Verstappen's Red Bull on another undistinguished afternoon.

But he needs more than sympathy now as the 21-race season reaches its half-way point and Ferrari team-mate Charles Leclerc is pushed by the Italian sports media as being ready to replace him as the team's outright number one driver.

The 21-year-old Monegasque already has more poles, podiums and fastest laps than his senior partner this season and appears to have eradicated his own errors, albeit that he is still waiting for his maiden F1 victory.

A special occasion for the 'Scarlet Scuderia' may not be expected, but should not be ruled out on the weekend that Mercedes will run in a special livery to make 125 years of motorsport at their home race where they are also title sponsors.

Team boss Toto Wolff warned that Mercedes' only defeat this year in 10 outings came in sweltering heat at the Austrian Grand Prix where Verstappen banged wheels in passing Leclerc to seize victory while Bottas and Hamilton struggled with cooling problems.

"High temperatures are forecast so we must stay vigilant," said Wolff.

"We must stay humble and work hard to achieve the best possible result."

It is expected that Mercedes will introduce a new cooling system for their cars and ensure an enthralling three-team scrap for success with Ferrari and Red Bull also likely to be competitive.

After seven wins in 10 races, however, it is difficult to see beyond Hamilton.

Lewis Hamilton Hockenheim German Grand Prix Formula 1
Get the latest Cricket news, check out the India cricket schedule, Cricket live score . Like us on Facebook or follow us on Twitter for more sports updates. You can also download the NDTV Cricket app for Android or iOS.