He wore his rainbow and coloured chevrons helmet on his way to victory last month in Qatar where similar laws exist and plans to do so again at next weekend's Abu Dhabi Grand Prix. 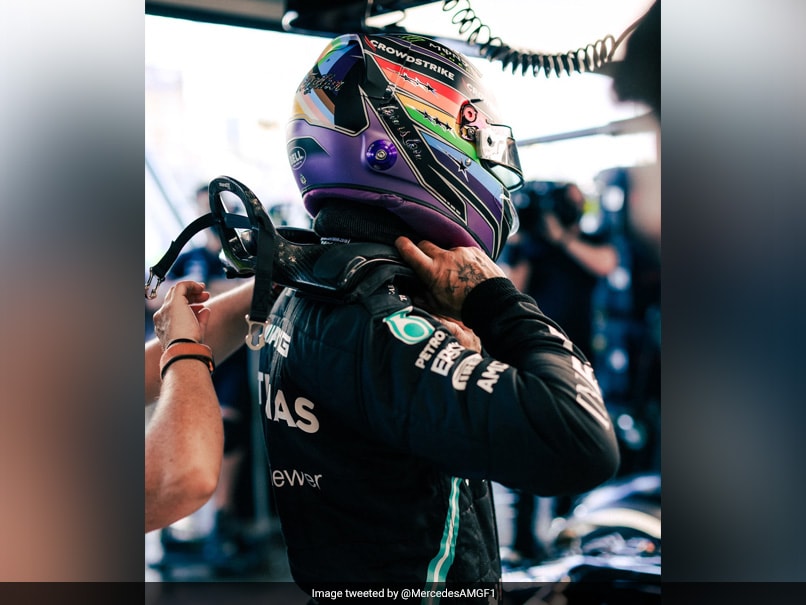 Lewis Hamilton, who will race in support of human rights and the LGBTQ+ community this weekend by wearing a rainbow-coloured helmet at the Saudi Arabian Grand Prix, found himself embroiled in another controversy on Friday. The seven-time world champion has said he felt uncomfortable taking part in the potentially-decisive event at the Jeddah Corniche Circuit, having made clear his opposition to "terrifying" laws that make same-sex relations illegal.

He wore his rainbow and coloured chevrons helmet on his way to victory last month in Qatar where similar laws exist and plans to do so again at next weekend's Abu Dhabi Grand Prix.

But before he began practice on Friday, Hamilton and his Mercedes team were criticised by British Housing Minister Michael Gove and survivors of London's Grenfell Tower fire for a sponsorship deal with a firm linked to the 2017 disaster.

Gove and the survivors called on Mercedes to reconsider the sponsorship, announced this week, that will see Kingspan branding visible on their cars.

Survivors group Grenfell United said, in a posting on Twitter, that the partnership was "truly shocking".

Gove said on Twitter he was "deeply disappointed" that Mercedes were taking sponsorship from Kingspan while an inquiry was on-going.

He said: "I will be writing to Mercedes to ask them to reconsider. The Grenfell community deserves better."

The Grenfell reaction came after Hamilton had made clear his views on human rights in Saudi Arabia.

"As I said at the last race, I felt the sport and we are duty-bound to ensure we try and raise awareness for certain issues, especially human rights in the countries we are going to," said Hamilton.

"With the utmost respect for everyone that is here, I have had a warm respect from everyone here on the ground.

"I can't pretend to ever be the most knowledgeable or have the deepest understanding of anyone who has grown up in the community here.

"Do I feel comfortable here? I couldn't say I do, but it isn't my choice to be here…

"The sport has taken the choice to be here and whether it is right or wrong, while we are here, I think it is important to raise awareness.

"You saw my helmet in the last race and I will wear it again here and in the next race. If anyone wants to take time to read what the law is for the LGBT+ community, it is pretty terrifying."

Mercedes Formula 1
Get the latest updates on ICC T20 Worldcup 2022 and CWG 2022 check out the Schedule, Live Score and Medals Tally. Like us on Facebook or follow us on Twitter for more sports updates. You can also download the NDTV Cricket app for Android or iOS.