Hamilton feels 'Sebastian Vettel is one of the luckiest'

The McLaren driver has said that Vettel's ascent was incredible and regards him as one of the luckiest. 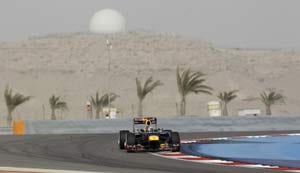 McLaren's Lewis Hamilton has described Sebastian Vettel as "lucky" after the German raced his Red Bull from the last position on the grid to a podium finish in Abu Dhabi on Sunday.

In a report published in BBC, the Briton said that Vettel's ascent was incredible. "(It was) incredible how he came up. He must be the luckiest driver in F1,"he was quoted as saying in the report.

Hamilton himself was the quickest in two of three practice sessions and took pole position. He however retired mid-way through the Abu Dhabi GP. In contrast, Sebastian Vettel managed to surge past cars with forceful intent as he finished the race behind winner Kimi Raikkonen and Fernando Alonso.

While Hamilton has been ruing the fact that a possible McLaren 1-2 was not realised here though it was possible, (read: We could have finished 1-2, says Hamilton) Vettel has been praised for his stunning comeback.

The 25-year-old driver described the race as crazy. (Read: Vettel charges to the top) A day later on Monday, Red Bull chief Christian Horner too chipped in saying it was a 'phenomenal' race and result. "I think it was one of the best [races] of his career. I think he really went for it and to go from the pitlane to the podium, it was phenomenal." (Read: Vettel lauded by Red Bull chief)