Formula One: Marussia keep Jules Bianchi for next year

Marussia have yet to win a point this season. There are six races left in the season, starting at Yeongam on Sunday. 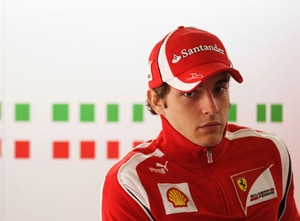 Struggling Marussia will retain Jules Bianchi as one of its drivers for next year, it was announced Thursday ahead of the Korean Grand Prix.

The Frenchman is in his debut full season in Formula One and placed 13th in Malaysia earlier in the campaign, his best finish to date.

Marussia have yet to win a point this season. There are six races left in the season, starting at Yeongam on Sunday.

"It's amazing for me and I'm very happy to stay. I feel very confident with them," said Bianchi.

"I will have much more experience in Formula One (after his first season) and winter testing, and the new rules -- with new engines -- so it will be great for the team.

"I don't know what to expect but for sure it will be an improvement."

Comments
Topics mentioned in this article
Formula 1 Honda Marussia Brawn McLaren Sepang Michael Schumacher Giancarlo Fisichella Jules Bianchi Lewis Hamilton
Get the latest updates on ICC T20 Worldcup 2022 and CWG 2022 check out the Schedule, Live Score and Medals Tally. Like us on Facebook or follow us on Twitter for more sports updates. You can also download the NDTV Cricket app for Android or iOS.