Team Marussia, for whom Jules Bianchi was driving at the time of his fatal crash at the Japanese Grand Prix in 2014, is also targeted by the action on the family's behalf brought by British law firm Stewarts Law 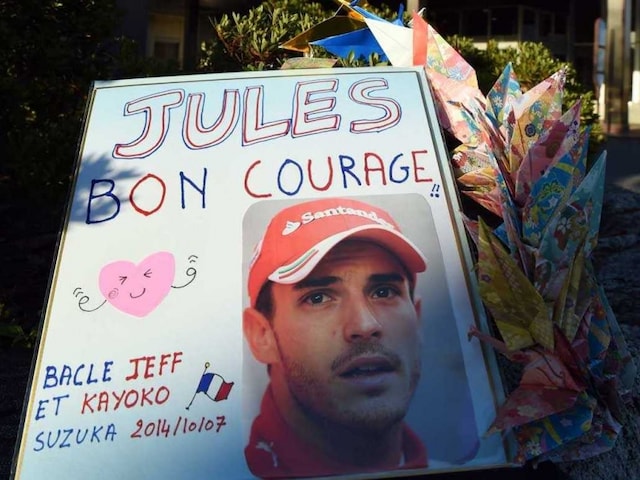 Jules Bianchi suffered a horror crash at the Japanese Grand Prix in 2014 and finally succumbed to his injuries in July 2015.© AFP

Late French driver Jules Bianchi's family on Thursday launched legal action in Britain against the Formula One Group and the FIA, the sport's governing body, demanding they accept responsibility for his death.

Team Marussia, for whom Bianchi was driving at the time of his fatal crash at the Japanese Grand Prix in 2014, is also targeted by the action on the family's behalf brought by British law firm Stewarts Law.

"We seek justice for Jules and want to establish the truth about the decisions that led to our son's crash," Bianchi's father Philippe said in a statement.

"As a family, we have so many unanswered questions and feel that Jules's accident and death could have been avoided if a series of mistakes had not been made."

Formal letters sent to the three bodies "invite them to accept that errors were made in the planning, timing, organisation and conduct of the race which took place in dangerous conditions during the typhoon season in Japan", the law firm said in a statement.

The "letters of claim" do not mean the case will go to court.

The FIA inquiry into the crash "failed to identify where errors had been made which led to Jules's death", he said.

"The Bianchi family are determined that this legal process should require those involved to provide answers and to take responsibility for any failings.

"This is important if current and future drivers are to have confidence that safety in the sport will be put first."

The 25-year-old's accident, when his Marussia car ploughed into a trackside crane, shocked the sport and brought memories spinning back of Ayrton Senna's death in 1994.

The long vigil for the comatose Bianchi ended nine months later, when the Frenchman finally succumbed to his horrific head injuries in July 2015.

Formula One introduced several new safety regulations following the crash, including a virtual safety car and bringing race starts forward to avoid drivers having to race in poor light.

A proposed closed-cockpit, however, was shelved.

Comments
Topics mentioned in this article
Marussia Jules Bianchi Formula 1
Get the latest Cricket news, check out the India cricket schedule, Cricket live score . Like us on Facebook or follow us on Twitter for more sports updates. You can also download the NDTV Cricket app for Android or iOS.