Since the Catalan track was introduced to the calendar in 1991, replacing a Spanish race held at Jerez, it has earned a reputation for offering a broad examination of the cars and drivers, thanks to its mix of medium and high-speed corners, a low-speed complex and a long straight. 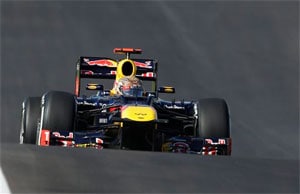 Formula One returns home this weekend for the first European race of the 2013 season with a familiar scenario unfolding amid hopes of an upset to match last year's unexpected dramas at the Spanish Grand Prix.

Defending triple world champion Sebastian Vettel of Red Bull, who was victorious at the Circuit de Catalunya in 2011, leads the title race again, this time with 77 points and a 10-point margin ahead of second-placed rival Kimi Raikkonen of Lotus and a 27-point advantage on third-placed Lewis Hamilton of Mercedes.

Each will arrive at the track, around 25 kilometres inland to the north of the Catalan capital, with high hopes that the upgrade packages on their respective cars can bring them victory in Sunday's 66-lap race on a circuit they know better than any other because it is used so much for testing and hosted two-thirds of the pre-season work for the 2013 title race.

Last year's winner, Venezuelan Pastor Maldonado is currently without a point in the championship after the four long-haul season-opening 'flyaway' events in Australia, Malaysia, China and Bahrain and not expected to ignite again the widespread celebrations of a Williams victory that ended with a serious blaze in the team garage.

But a tightly-contested scrap between the leading teams at the front of the field is expected and that should go some way towards indicating which drivers are likely to emerge as the most serious contenders for glory this year.

Vettel, and his Red Bull team, are already setting the pace, albeit after a spate of intra-team scraps initiated by the 25-year-old German's decision in Kuala Lumpur to ignore team orders and steal victory from his team-mate Mark Webber.

That drama set the tone for much of the season to date as it arose from the teams' need to preserve tyres and car performance in demanding conditions -- a stage that may be replicated this weekend if hot conditions play havoc with Pirelli's supply of rubber and turn the race into a strategic contest again.

Since the Catalan track was introduced to the calendar in 1991, replacing a Spanish race held at Jerez, it has earned a reputation for offering a broad examination of the cars and drivers, thanks to its mix of medium and high-speed corners, a low-speed complex and a long straight.

In 16 of the last 22 seasons, the winning team in Spain lifted the Constructors' Championship.

Additonally, in 18 of those races, the driver who started from pole position was triumphant. Maldonado won, from a 'lucky pole', only after Hamilton had been excluded from qualifying last year after clocking the fastest lap, but suffering fuel problems afterwards.

Demanding, predictable and exhaustive, the circuit is also usually hot, dusty and dull -- producing races with little overtaking and not much incident.

It is sure to create fervour around home favourite, two-time champion Fernando Alonso of Ferrari, but may not deliver a contest to remember.

Alonso, however, fourth in the title race and enjoying the prospect of racing in a competitive car this year, is expected to mount a challenge to Vettel, Webber, Raikkonen and Hamilton at the front of the field.

Raikkonen, whose future has already become the subject of much conjecture, will hope that Lotus have found the developments they need to stay in the title race after a promising start but this week's loss of technical director James Allison, who has been approached by a host of teams including Ferrari, McLaren and Williams, may be a blow.

He has been replaced by the promotion of Nick Chester from within the ranks and it remains to be seen if that change has any effect on the Lotus performance as the season unfolds, or the future of Raikkonen, one of five world champions in the field this year.

"Nick is well known to everyone at Enstone having been with the team for over 12 years," said Boullier.

"He is already directly involved with this and next year's cars, ensuring a smooth transition which has been underway for some time. It's an illustration of the strength and breadth of talent at Enstone that we can draw on personnel of the calibre of Nick and it's something of an Enstone tradition for new technical directors to be promoted from within."