De Villota was reportedly found in her hotel room in Spain by emergency services on Friday morning. 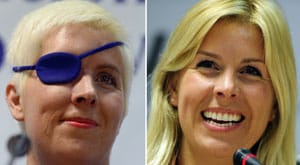 Former Formula One driver Maria de Villota was found dead in a hotel room in Seville on Friday, of natural causes according to police. She was 33.

Former Formula One test driver Maria de Villota was found dead in a hotel room in Seville on Friday, of natural causes according to police. She was 33.

Spanish police told The Associated Press that De Villota was discovered in the Hotel Sevilla Congresos in the morning, dead "apparently from natural causes." An autopsy will be carried out. The police spokesman spoke under anonymity in line with police policy.

De Villota was seriously injured last year in a crash during testing for the Marussia F1 team in England, losing her right eye and sustaining other serious head injuries that kept her hospitalized for a month.

She also had driven in the world touring car championship in 2006 and 2007 plus the Superleague open-wheel series.

De Villota, a Madrid native, was the daughter of Emilio de Villota, who competed in F1 from 1976-82.

Her family used De Villota's Facebook page to say "Dear friends: Maria has left us. She had to go to heaven like all angels. I give thanks to God for the year and a half that he left her with us."

F1 drivers at the Japanese Grand Prix were stunned by her death.

Sauber's Monisha Kaltenhorn, the first female team principal in F1, said "If anybody represented strength and optimism, it was Maria. Her sudden death is a big loss to the motorsport world."

Williams development driver Susie Wolff recalled how De Villota asked her to carry on for her and all women drivers following her accident.

"She very much said to me after it, 'It's up to you to go out there and show them that it (a woman driver in F1) is possible,'" Wolff said. "She knew that women could compete at that level and that's why, after her accident and her not being able to do that anymore, she just wanted someone to know it was possible. She had such a spirit for life. What she came through was a testament to her strength of character and her positive outlook on life."

"It is with great sadness that we learned a short time ago of the news that Maria de Villota has passed away," Marussia said in a statement. "Our thoughts and prayers are with Maria's family and friends at this very difficult time."

Fellow Spaniard Fernando Alonso said: "It's very sad news for the world of motorsport as Maria was loved by everyone. Now, all we can do is pray for her and for her family."

De Villota was in Seville to participate in the conference "What Really Matters," whose mission is to inspire and teach young people "universal human values," in the words of the organizers.

Organizers canceled the conference on receiving news of her death and issued a statement "transmitting their care and support to the family and loved ones of Maria del Villota."

On Monday, De Villota was to present a book, "Life is a Gift," detailing her ordeal following her driving accident.