Force India not taking things for granted after Bahrain show

Team Principal Vijay Mallya said the team was not complacent after fantastic result in Bahrain as the European leg of the season-2013 begins on Sunday. 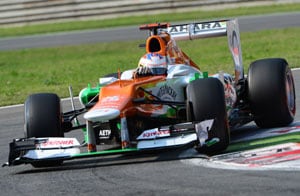 Encouraged by its "best ever" start to season, Force India is determined to see its drivers on the podium soon as the side prepares "hard" to compete in Sunday's Spanish Grand Prix.

Paul di Resta came close to getting the team its first podium of the season but had to be content with a fourth-place finish in the last race in Bahrain.

Team Principal Vijay Mallya said the team was not complacent after fantastic result in Bahrain as the European leg of the season-2013 begins on Sunday.

"Overall the balance is extremely positive for Sahara Force India with our best ever start to a season. In terms of points scored we are nine points up compared to last year and we've been up at the sharp end fighting with the big teams," Mallya said.

"After the pit stop problems in Malaysia, points finishes in China and Bahrain have set us back on the right path, but nobody in the team is taking it for granted and we will not rest on our laurels. At both the factory and at the track, everyone is working hard to ensure we can build on these good results. We intend to hold our ground and remain in the hunt for points and podiums," Mallya added.

Paul said to be ahead of McLaren after four races is a credit to the team and podium is not that far now.

"Of course we want to be on the podium and it was very close in Bahrain, but I'm sure it will come soon enough."

The Scot said they have good understanding of the Barcelona track but it is crucial to get right aero balance to achieve desired result here.

"I guess we have more data around Barcelona than anywhere else, but at the same time the temperatures will be much higher at this time of year. So I'd expect that to change things quite a lot and impact on the tyres.

"Also, it's one of those tracks where you're constantly chasing the right aero balance to cope with the long, high-speed corners, especially turn three. But when you come to the end of the lap you need the mechanical grip for the hairpins and chicanes," he said.

Adrian Sutil, who has missed points in the last three races, said he prefer not to think about negatives. In China he was hit from the back and in Bahrain his car suffered tyre punctures, compromising his result.

"These things happen all the time in Formula One -sometimes you benefit from them and sometimes it goes against you instead. They all balance by the end of the year."

"It is important, after three difficult races without points, to finish the race without any incidents. If I do that, I should have the pace to be among the front-runners. I have to do my job, avoid mistakes and hopefully my luck will change," the German said.