Five Talking Points Ahead Of Formula One Start In Austria

Seven months after they last competed in earnest, the Formula One circus will push a post-lockdown reset button to open the 2020 season in Austria. 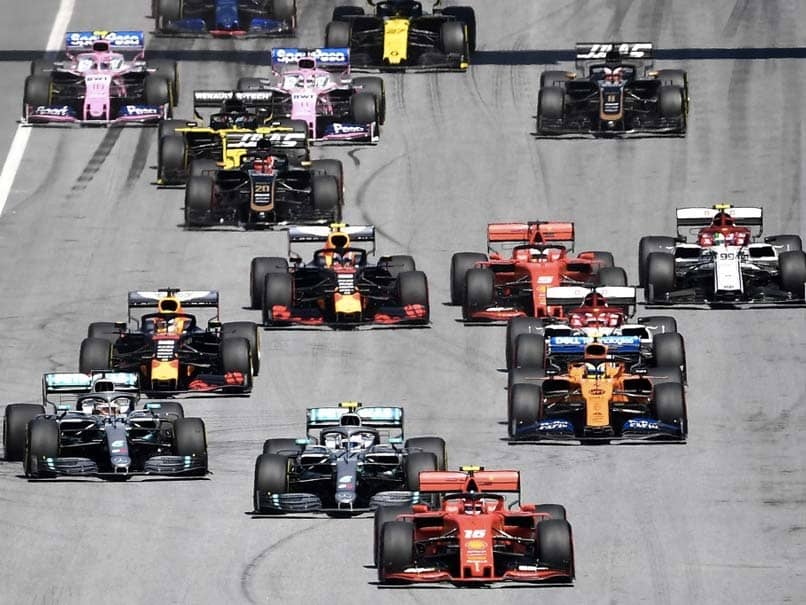 Formula One emerges from its three-month coronavirus lockdown with Sunday's new season curtain-raiser, the Austrian Grand Prix. Seven months after they last competed in earnest, the Formula One circus will push a post-lockdown reset button to open the 2020 season in Austria on Sunday. The event at Spielberg is being held on its original calendar date, but is not the once-anticipated 11th round of the championship, but the first -- a season-opener delayed by the global coronavirus pandemic. For all involved, who are tested four days before the event and five days later, it will be an unprecedented and unique experience.

Here's a look at five talking talking points ahead of the start of the behind-closed doors race at the Spielberg circuit.

The main threat to Lewis Hamilton's bid to land a record-equalling seventh drivers' title is likely to be himself -- just ahead of Mercedes team-mate Valtteri Bottas and Red Bull's Max Verstappen.

The sport's first black champion has admitted he is committed to racing for more than personal or team triumphs.

"I'm racing for all of you out there who may feel that you don't have a voice," said the Briton, who made his voice heard in support of recent anti-racism protests during the enforced time-out.

"In the world, in the society that we live in, I think making it as a young black kid from a council estate in Stevenage, making it to F1 through the tiniest window of opportunity -- that's a very, very important part of my journey and then staying there and continuing to deliver against adversity."

Asked where F1 should race, he added: "Africa. It's such an important place to go back. At the moment, F1 goes to countries and doesn't really leave much behind, if anything. Formula 1 has to shift into being a sport that does go to places and leaves behind something that can really help the communities."

Verstappen's chance to seize the day?

Having proved his speed and racing talent this is the time for Max Verstappen and Red Bull to seize their moment and emerge from the opening trio of races as championship leaders.

A year ago, the young Dutchman bullied his way to victory at the Red Bull Ring and a double repeat of that plus a strong result at Budapest would see the Milton Keynes-based team on top of the embryonic title race.

Pre-season testing in Barcelona suggested their car is very fast, but also 'skittish' and may face reliability problems.

But the driver pairing of Verstappen and Alex Albon has a proven ability to shine in challenging conditions and can beat Ferrari to take the fight to champions Mercedes.

Will Vettel shine in final season with Ferrari?

After confirming he is leaving Ferrari at the end of this year, Sebastian Vettel may feel freed and capable of delivering the consistency and speed that can inspire the team again despite the threat of Charles Leclerc.

The four-time champion has the speed and quality, but Ferrari have to deliver a car that can show immediate performance development as the season unfolds.

Pre-season testing suggested that this year's machine had sacrificed some of last year's outright straight-line speed for improved pace in slow and medium corners.

End of the road for Williams and what now for talented Russell?

George Russell and Williams face a defining challenge and season after the famous British team was put up for sale during the lockdown -- leaving their young and talented English driver to race for his future this year.

Russell, a member of the Mercedes junior driver programme, is tipped to have a big future, but needs a stronger team in 2021 to prove himself unless Williams find some resurgent form and haul themselves off the bottom of the championship.

Russell made good use of the lockdown to become F1's 'virtual champion' during e-racing from his home computer and said recently he is "very excited" to return to racing.

No hugging and not much prospect of joy for Ricciardo at Renault?

Daniel Ricciardo is famous for his beaming smile and big hugs, but he has had to abandon his tactile approach to life.

He will be joined by a new Renault team-mate in Frenchman Esteban Ocon, but decided during lockdown to leave the team next year and switch to McLaren as successor to departing Spaniard Carlos Sainz, who is joining Ferrari.

The fact that McLaren are switching to Mercedes engines was a factor and one that may not have enhanced his standing with Renault as he starts his final season.

"I've got to keep my distance," he admitted in a team video call last week.

"We're going to find some new ways to embrace each other, especially after a good result, but obviously we're going to do what we can to keep this thing out of the paddock."

Max Verstappen Formula 1
Get the latest updates on India vs Australia Series, check out the India vs Australia Schedule for 2020-21 and Ind vs Aus live score . Like us on Facebook or follow us on Twitter for more sports updates. You can also download the NDTV Cricket app for Android or iOS.