The International Automobile Federation (FIA) said it had "initiated a detailed analysis of Romain Grosjean's accident at the 2020 Bahrain Grand Prix". 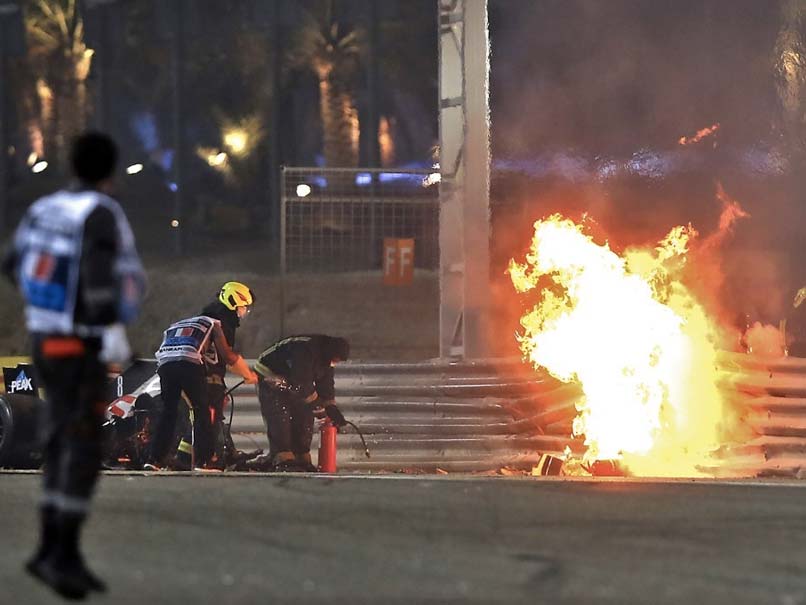 Romain Grosjean's car went up in flames after hitting a barrier at the Bahrain Grand Prix.© AFP

Motor racing chiefs announced on Thursday the launch of an investigation into Romain Grosjean's fiery Bahrain crash, saying the forensic probe would take "around six to eight" weeks to complete. The French Formula One driver somehow wrenched himself free from his blazing Haas car with just burns to his hands and a broken left foot after a collision with Daniil Kvyat on the first lap of Sunday's Grand Prix. He left the hospital on Wednesday. In the immediate aftermath of the shocking smash there was widespread praise for modern safety measures in the sport, but also concern over what F1's motor sport managing director Ross Brawn described as "unpredictable" failures.

The International Automobile Federation (FIA) said it had "initiated a detailed analysis of Romain Grosjean's accident at the 2020 Bahrain Grand Prix".

The FIA's safety director, Adam Baker, said: "With so much data available in Formula 1, it allows us to accurately determine every element of what occurred and this work has already begun.

"We take this research very seriously and will follow a rigorous process to find out exactly what happened before proposing potential improvements."

The FIA probe will look at a range of factors including Grosjean's helmet, safety harness, headrest, in-car extinguisher and the Halo cockpit protection.

The Halo device is widely considered to have helped save Grosjean's life as his car was sliced in two after careering into a barrier.

"The 'halo' saved the day and it saved Romain," Brawn said on Sunday.

"There was controversy in developing it initially, but there can't be any doubt now, so hats off to those who pushed for the introduction."

But he added: "The fire is worrying. The split in the barrier is worrying and the barrier coming apart, but we can be happy with the safety of the car -- that got us through today, but things failed in an unpredictable way.

"We haven't seen anything like that for a very long time, but the barrier splitting normally results in a fatality."

The FIA will examine the high-speed camera mounted on Grosjean's car, which faces the driver.

Data will also be gathered from the in-ear accelerometers that are moulded to fit inside a driver's ear canal to measure the movement of his head.

Romain Grosjean
Get the latest updates on ICC Women's Cricket World Cup 2022 and IPL 2022, check out the Schedule , Live Score and IPL Points Table. Like us on Facebook or follow us on Twitter for more sports updates. You can also download the NDTV Cricket app for Android or iOS.