FIA president Jean Todt said on Tuesday that Australia should be permanently retained on the Formula One circuit. 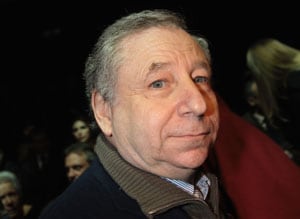 FIA president Jean Todt said on Tuesday that Australia should be permanently retained on the Formula One circuit.

Todt, in Melbourne as part of a global road safety campaign, said Australia should always host an annual F1 race.

The Frenchman's view appears to be at odds with those of F1 boss Bernie Ecclestone, who said recently that F1 "does not need" the Australian race as debate about its value to its host state of Victoria emerged once again.

Todt was Ferrari F1 team principal for 15 years until 2007, then Ferrari CEO before being appointed to head motorsport world governing body FIA in 2009.

Todt was keen to promote road safety rather than motorsport on Tuesday, but said as long as F1 continued, the Australian Grand Prix should be a part of it.

"Australia has been doing a great job together with people from CAMS (The Confederation of Australian Motorsport)," he added. "They have put Australia among the best grand prix in the season."

"Melbourne is a sensational venue with nice people, and when I arrived yesterday, I was thinking how good Melbourne is for Formula One."

Comments
Topics mentioned in this article
Bahrain Grand Prix Karun Chandhok McLaren Michael Schumacher Brawn Honda Giancarlo Fisichella Lewis Hamilton Sepang Formula 1 Australian Grand Prix
Get the latest updates on ICC T20 Worldcup 2022 and CWG 2022 check out the Schedule, Live Score and Medals Tally. Like us on Facebook or follow us on Twitter for more sports updates. You can also download the NDTV Cricket app for Android or iOS.