The international body understands excitement but says image of drivers, teams and sponsors can take a hit. 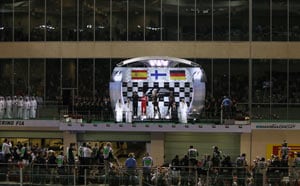 Formula One drivers are fast on the track and some are slippery while talking. Federation Internationale de l'Automobile (FIA) though wants the slippery bit to be put into check and has reportedly sent a message to all teams to have their drivers mind their tongue.

European media agencies quoted a FIA spokesperson as saying that a private and friendly letter had been sent to all the teams about the need to keep bad language in check. It may have been a direct fallout of Sebastian Vettel and Kimi Raikkonen on-podium talk with David Coulthard in which both drivers swore live on air. (Also see: The 'naughty side' of Vettel from the Indian GP)

FIA though in its letter says that it can be hard to keep emotions in check in the thick of things and when adrenaline is pumping. It however cautions that use of such language can bring bad repute to the drivers, teams and sponsors. It is being called a collective responsibility of FIA and teams to ensure that drivers refrain from such language during media events.

The body introduced on-podium interviews this season in a bid to attract more fans to the circuits. Previously, winners were handed their trophies and they celebrated a bit with champagne before being hustled in for media interaction.