Ferrari to be competitive from the start, says Fernando Alonso

Alonso lost out on the title in the final race of last season, finishing just three points behind Vettel as Ferrari's poor start to 2012 proved costly. 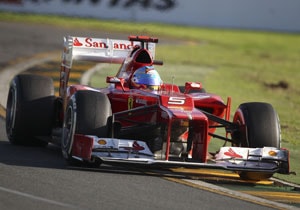 Fernando Alonso is confident Ferrari will fight for the Formula One world title right from the start this season and picks Lewis Hamilton as the man to beat, rather than triple champion Sebastian Vettel.

Alonso lost out on the title in the final race of last season, finishing just three points behind Vettel as Ferrari's poor start to 2012 proved costly.

Ferrari struggled in the opening rounds, with its new car proving uncompetitive - apart from Alonso's win in the second race in Malaysia.

"It is maybe impossible to be worse than last year, so I am confident," Alonso said at Ferrari's annual winter retreat in the Italian Dolomites on Thursday. "The rules are continuing more or less the same as last year in terms of aerodynamics. In the winter of 2012 we changed completely the exhaust position compared to 2011, and it was a little bit of a guess what we found on the car.

"But this year everything should be much more normal and we are much more confident. We can be faster or slower (than our rivals) but not 1.5 or two seconds off the pace, because that was a record we had last year."

Two-time champion Alonso claims he feels no added pressure to win the title after three seasons with the Italian team.

"The aim of the best team in F1 history, Ferrari, is to win the title," the Spaniard said. "It's also my personal goal, to lift the trophy in red would be the best. But I don't feel the pressure of being obliged to win, that obligation never exists in sport.

"However, it's been many years now that at the end of the season we have a few less points than the winner and still everyone says I'm the best. It increases your self-esteem, it repays you a bit for your sacrifices, but the aim is always to win."

Vettel won his third successive title in 2012, edging out Alonso into second place, just as he had done in 2010.

But it is Hamilton who Alonso sees as his fiercest rival, following the British driver's move from McLaren to Mercedes.

"Hamilton remains the best driver," Alonso said. "Vettel was only that in parts, but he deserved to win three titles in a row.