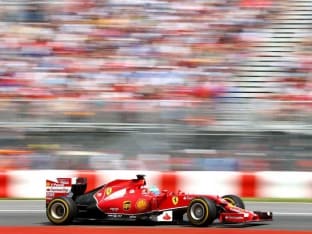 Ferrari chairman Luca di Montezemolo may pull his team out of Formula One because it "isn't working" and the Italian firm may switch to sports-car competition, he told Friday's Wall Street Journal.

"Formula One isn't working," he told the Journal in an interview in Maranello, Italy.

FIA's new regulations make the sport more environmentally friendly and reduce costs, such as by introducing of a new turbo hybrid V6 engine, which is quieter and less polluting.

But the boss of the most iconic brand in motorsport complained that the restrictions would muffle a key element of the Grand Prix experience: engine roar.

"People watch racing to be entertained," he said. "No one wants to watch a driver save gas or tires. They want to see them push from here to there. It's sport, yes, but also a show."

Montezemolo in particular attacked the rules that forbid advances on engine design during the season, a situation that has left Ferrari in third place in the standings.

"And we can not touch the engine?" he said. Ferrari is a subsidiary of the Fiat Group, which Montezemolo chaired from 2004 until 2010.

The brand has 15 F1 drivers' titles and 16 constructors' championships under its belt as well as 221 Grand Prix victories.

La Scuderia has competed in Formula One since its debut in 1950. It had also participated in endurance races such as the 24 Hours of Le Mans, but from 1973 founder Enzo Ferrari chose to concentrate exclusively on Formula One.

Montezemolo stressed no decision has been made yet about leaving Formula One, but he indicated Ferrari could pursue endurance racing as soon as 2020, the Journal reported.

"We can not do sports-car racing and Formula One. It's not possible," he said.

Since the start of the 2014 season Ferrari has been trailing Mercedes and Red Bull, and is even under threat from Force India.

Ferrari is fourth in the Constructors' Championship, while its driver Fernando Alonso is fourth in the drivers' standings, with less than half the points of leader Nico Rosberg of Mercedes.