Fernando Alonso remained convinced on Saturday that he could keep alive his dream of winning a third drivers' world title despite qualifying only ninth for Ferrari in Sunday's United States Grand Prix. 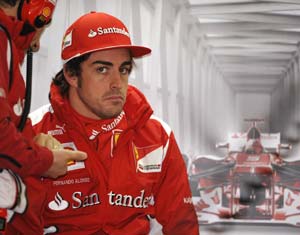 Fernando Alonso remained convinced on Saturday that he could keep alive his dream of winning a third drivers' world title despite qualifying only ninth for Ferrari in Sunday's United States Grand Prix.

Defending champion Sebastian Vettel of Red Bull took his sixth pole position of the season in dominant fashion and could become the youngest triple champion in Formula One history if he outscores Alonso by 15 points.

But the Spanish two-time former champion was still defiant after a session that left him struggling for outright competitive pace on the 'green' new Circuit of the Americas.

"Yes, we expected it," Alonso said. "We knew it was going to be complicated. We started seventh in Abu Dhabi and eighth here, so more or less the positions have been the same.

"And, as always, the race is tomorrow... I still think that tomorrow we are going to reduce the gap to Sebastian, which is what counts. He starts from pole and he has a very strong pace, but the race will be long and let's see if we can seize our opportunities."

Alonso will start from eighth position on the grid thanks to a penalty for Frenchman Romain Grosjean of Lotus who had a new gearbox fitted to his car before qualifying.

Alonso was out qualified by team-mate Brazilian Felipe Massa for only the second time this year.

He needs to finish in at least fourth position to keep his championship hopes alive, if Vettel wins the race, but insisted he remains confident about his prospects.

"We'll see how the start goes," he said. "If he wins the race and then wins again in Brazil he will be champion and deservedly so.

"We are fighting to make it into Q3, so we have got here miraculously and we are going to try to hang on to hope. As I said, for whatever reason, I have the strange feeling that tomorrow we will reduce the gap."

Comments
Topics mentioned in this article
United States Grand Prix Lewis Hamilton McLaren Renault Fernando Alonso Italian Grand Prix Formula 1
Get the latest Cricket news, check out the India cricket schedule, Cricket live score . Like us on Facebook or follow us on Twitter for more sports updates. You can also download the NDTV Cricket app for Android or iOS.