The exciting 2014 season was won by Lewis Hamilton and dominated by Mercedes. The unfortunate crash of Jules Bianchi though once again showed that the sport has dangerous twists in it. 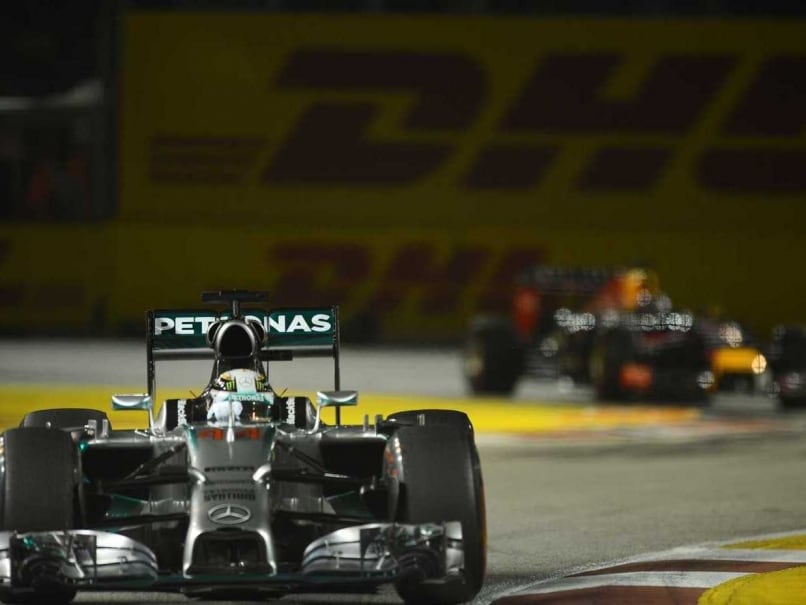 Mercedes drivers kept other racers behind them in almost every race of 2014 season.© AFP
London:

Formula One delivered a dramatic year of riveting rivalry, political controversy, human tragedy and financial uncertainty in 2014 as Lewis Hamilton joined the sport's hall of fame as a double world champion.

A season of memorable, tense and furious racing was overshadowed by one ferocious intra-team rivalry, a tragic rain-lashed reminder of its dangers and a prolonged financial furore that may threaten its stability.

As Hamilton ended his year as champion, Jules Bianchi remained in a serious condition in hospital after suffering severe head injuries when he crashed in Japan and the sport's finances, and future were the subject of much speculation.

The sale in December of a nose section from a Marussia car, driven by Max Chilton, for Â£15,000 (pounds sterling) in an online auction sale that followed the team's collapse was followed by reports that the sport's commercial owners were struggling to find a leader to succeed 84-year-old ring-master Bernie Ecclestone.

At the same time, after a winless season, Ferrari confirmed more staff departures - including the exits of engineering director Pat Fry and chief designer Nikolas Tombazis -- following a year of unprecedented upheaval that saw two-time champion Fernando Alonso, tempted by a massive salary, departing for McLaren.

Rarely before had the gulf between F1's 'haves' and 'have-nots' been exposed so starkly as it was in 2014 when the grid was reduced, in Texas, to 18 cars amid claims that a further three teams were in revolt.

The season began in Australian sunshine at Melbourne where a new set of technical regulations ushered in an era of modern hybrid turbo-powered cars that spelt the end of Red Bull's dominance.

In the opening race at Albert Park, Nico Rosberg emerged triumphant for Mercedes after his team-mate Lewis Hamilton had retired, but it was the Briton who had the last laugh, securing his second world title with a dazzling victory under the floodlights at Abu Dhabi's Yas Marina circuit.

In between, the German and the Englishman dominated the title race, mixing raw rivalry with tension and acrimony, and the narrative of a sporting soap opera that saw Sebastian Vettel and Red Bull crash to earth after four successive years as champions.

Vettel's departure to Ferrari and the Renault-powered team's loss of not only horsepower, but more than 60 trophies - some of which were recovered from a lake -- after a smash-and-grab raid at its Milton Keynes base summed up their season as much as Daniel Ricciardo's huge Australian smile as he finished third in the title race.

Ricciardo was the year's most improved driver, winning three races - in Canada, Hungary and Belgium - to add some necessary spice and variation to the consistency of Mercedes as Hamilton and Rosberg reeled off a record 16 wins and 11 one-two finishes.

Hamilton's triumph, by 67 points, was the first by a Mercedes driver since the legendary Argentine Juan Manuel Fangio took the title in 1955 and came by dint of sheer determination after a run of setbacks that twice handed the initiative to Rosberg in a roller coaster season.

The biggest flash points came at Monaco, Hungary and Belgium as Hamilton and Rosberg, friends and rivals since being paired as teenage karting team-mates, battled for glory amid a media focus that exposed their contrasting backgrounds and approaches to racing.

As their differences rose to the surface, the Mercedes team struggled to control their drivers' rivalry, notably in Monte Carlo where they disagreed after Rosberg had run off track in final qualifying and Belgium, following a second lap collision in the race left Hamilton with a puncture.

That led to a team reprimand for the German and, from the following race in Italy, Hamilton seized the initiative to reel off five successive victories that gave him the momentum to take the title.

Of those, one came in Japan where, in torrential rain, Frenchman Bianchi's Marussia car collided with a recovery vehicle and another at Sochi, in the inaugural Russian Grand Prix, where Russian president Vladimir Putin used the event for political ends with a pre-race show of nationalism.

Bianchi was taken to hospital in Yokkaichi where he remained in a critical condition for weeks before he was transferred back to Nice in France to continue his recovery. It was his and his team's last race, the cash-strapped team folding and going into administration with four races remaining.

The Caterham team also went into administration, but returned - with public support via 'crowd-funding' - to race in the season-ending Abu Dhabi Grand Prix while up 'for sale' under its administrators.

Granted a special dispensation to race their 2014 cars in 2015, Caterham's future remained precarious in late December as a buyer was sought.